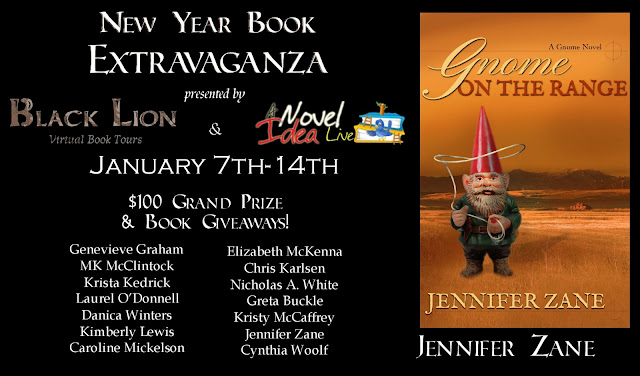 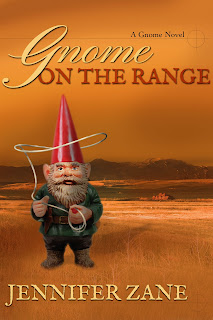 Gnome on the Range
The first book in the bestselling Gnome Novel Series! Once you get the zing you can’t go back.

Jane West has everything a woman could want. A job in a small Montana town’s only adult store, two busy young boys and one dead husband. Everything except a little excitement--a little zing. But that changes one summer morning at a garage sale when her kids buy some garden gnomes.

Now someone wants those gnomes and will let nothing get in their way. Including Jane. This new excitement for Jane spells trouble for a relationship with new neighbor--and hot fireman--Ty Strickland. Can Jane and Ty handle a relationship meddling mother-in-law, crazy kids, and stay alive while trying to solve the mystery of the garden gnomes?
Kindle | Print


Praise for Gnome on the Range

Enjoy an Excerpt from Gnome on the Range

The next morning I was out bright and early. If you lived in Montana, you got out and enjoyed good weather while the getting was good. Even in July. Especially in July. The days were long, the sky was big and there was a lot to do before it got cold. I don’t mean November like the real world. This wasBozeman. Summer was over the day after Labor Day. It’s even been known to snow in July. With that small window for wearing shorts and flip-flops and the threat of white flakes at any time, I was out and about by seven on a Saturday. I got more done before nine in the morning than the military. Not because I really wanted to, but because I have kids.

My boys, Zach and Bobby, were raring to go. It was Saturday morning, and that meant garage sales. To kids, garage sales were serious business. Toys to be had, books to find. Even free stuff to rake in. As a grown up, I loved buying stuff I didn’t know I needed. Last week I bought a shoe rack for my closet and a toaster for the pop-up camper. For two dollars, I can have some toast while camping in the wilderness.

We were in the car, Kids Bop bounced out from the CD player. I had the hot garage sales circled in the classifieds, the Bozeman Chronicle open on the passenger seat next to me, ready to guide us to our treasures. The morning’s first stop was a volunteer fire department’s pancake breakfast. Bargain shopping could wait. With a pancake breakfast, I didn’t have to cook (at seven in the morning, who wanted to?), the kids could stuff their faces, and I could get coffee. Coffee.

I realized the kids were yakking at me, so I turned down a sugary version of Dynamite to listen.

“He’s so cool, Mom. He’s a fireman and he was a soldier and he said we could play in his yard. He’s at least seven feet tall. His snow blower is bigger than ours. His truck is silver and it has four doors,” Zach said from his booster in the back.

“He gave me a high five after I ridden my bike down the sidewalk. His name is Mr. Strickland,” Bobby added. I peeked in the rearview mirror and saw him nod his head, super serious.

The man I’d heard about ever since the boys woke me up was Mr. Strickland, the new neighbor. Mr. Strickland did this, Mr. Strickland did that. The boys’ new super hero had just bought the house two doors down. I hadn’t met him yet, but the kids obviously had. In my coffee deprived mind I pictured a fifty-something man with half a head of graying hair, a slight paunch—he was a fireman, so it couldn’t be too big—and by Zach’s description, taller than a basketball player. Great. He’d come in real handy when another ball got stuck up in the gutter.

“The Colonel likes him a lot,” Zach said.

Well, that settled it. If the Colonel gave his approval, the man had to be all right, regardless of gargantuan size. The Colonel’s real name is William Reinhoff, but everyone who knew him, which was the entire town, called him Colonel. He’d earned the title while fighting inVietnamand it stuck. Gruff and ornery on the outside with a campfire toasted marshmallow center, he was one of my favorite people. The Colonel’s house was wedged between Mr. Strickland’s and mine. He was next-door neighbor, pseudo father, close friend, occasional babysitter, and my mother’s long-distance boyfriend. The kids had obviously met Mr. Strickland with the Colonel while I was at work yesterday and the man had made a serious impression. No way would the Colonel let the kids call the man by his first name. He was entirely too old school for that.

This book sounds like a fun read. Can't wait to pick it up. Thanks for the giveaway.