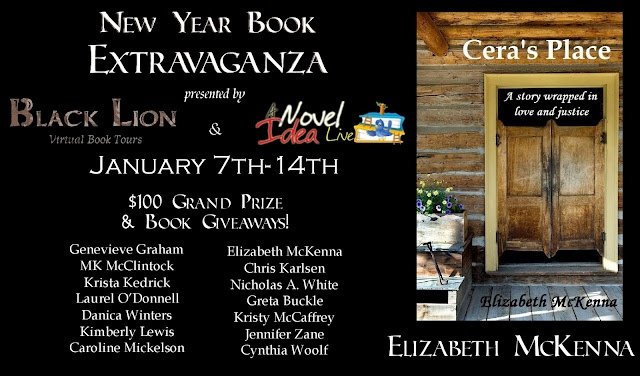 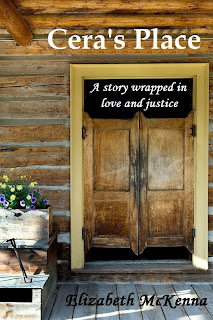 In 1869, San Francisco saloon owner Cera Cassidy offers redemption to any woman looking for honest work. At Cera's Place, men can get a decent hot meal with a whiskey, but if they want anything more, they have to take their desires elsewhere. One summer night, a distraught Chinese girl bursts through the swinging doors with a shocking tale of murder, kidnapping, and prostitution. Outraged, Cera vows to set things right.

Jake Tanner, a scarred ex-soldier haunted by the horrors of the Civil War, is on a mission to fulfill a friend's dying wish. The trail has brought him to Cera's door. Captivated by her Irish beauty, he wants to join her fight - but will she let him?

Elizabeth McKenna's debut novel is a fast-paced adventure filled with memorable characters that will leave you wanting more. Get lost in a time gone by and fall in love today!


Excerpt from Cera's Place
While they waited for Ginger’s return, Jake sized up the saloon owner. Besides the flaming auburn hair, Cera’s Irish heritage had given her porcelain-colored skin. A splash of freckles dotted her cheeks and nose, softening her sharp jaw. He couldn’t tell how full her lips were, as she kept them pressed into a hard line. Though the bodice of her dress was modestly cut compared to Ginger’s, the exposed flesh looked able to please any warm-blooded man.
Cera thumped the butt of the shotgun against the floor. Startled, he raised his eyes to find the fire in hers had turned to ice. Jake quickly looked away, pretending to study the décor of the room.
Breaking the awkward silence, he motioned with his hand. “You seem to have a very successful business here.”
“We do all right,” Cera conceded in a clipped voice.
Picking up Ginger’s wine glass, he asked, “Do you sell much of this?”
“Not as much as whiskey and beer, of course, but it comes cheap so I don’t fret about it. My partner’s friend is trying to introduce sparkling wine to the region. We offered to help.” Perhaps realizing she was being friendly, she clamped her mouth shut and resumed glaring at him.
Unperturbed, Jake tried again. “I’m surprised by the sophistication of your place considering the neighborhood. It’s quite a dichotomy. ”
“Well, now, there’s some 50 cent words. Looks like the soldier has some education under his gun belt. You mean you’re wondering why I don’t sell whores, don’t you?”
Jake shrugged in response.
“I won’t make money off of someone else’s misery, and whoring is a miserable business. Now you’re wasting my time, Captain. What’s your story? I have a saloon to run and no time for lies.”
Jake shook his head. “What I told Big Red is the God’s honest truth. I’m looking for a girl named Sadie. Before her daddy died, he asked me to give her a locket. I’ve been trying to find her for several years now. I was told she worked here—or used to. If you can tell me where she was headed, I would be much obliged.”
Cera’s fingers wrapped and unwrapped around the shotgun’s barrel a few times. “Ginger said you have proof. Show me.”
Jake pointed to his pocket and Cera nodded her consent. He carefully brought out a faded photograph and an oval-shaped, gold locket on a thin chain. As he passed the objects to her, their hands touched and his heart skipped a beat. Surprised at his body’s reaction, he thought back to the last time he had truly desired a woman. For the briefest moment, he allowed himself to see his late wife’s gentle smile before pushing away the melancholy memory.

Elizabeth McKenna is a full-time technical writer/editor for a large software company. She never read romance novels until one Christmas when her sister gave her the latest bestseller by Nora Roberts. She was hooked from page one (actually, she admits it was the first love scene).

She had always wanted to write fiction, so when a psychic told her she would write a book, Elizabeth felt obligated to give it a try. She combined her love of history, romance and a happy ending to write her first novel Cera's Place. She recently released a short story titled The Gypsy Casts a Spell.

Elizabeth lives in Wisconsin (Packers, Brewers, and Badgers - oh my!) with her understanding husband, two beautiful daughters, and sassy Labrador. When she isn't writing, working, or being a mom, she's sleeping.

This book sounds fantastic. Can't wait to read it.

thanks for another awesome book and giveaway

Thanks for the introduction to a new author and book for me.