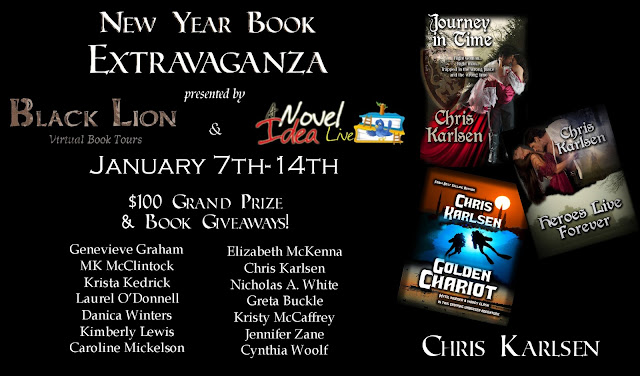 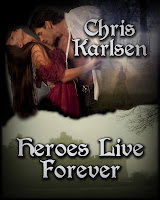 Elinor Hawthorne has inherited a house haunted by the ghosts or two medieval knights, Basil Manneville and Guy Guiscard.

Basil is the man of her dreams, her knight in shining armor. She falls in love with him and he with her. Basil soon realizes she needs to live a normal life, a happy life with a mortal, not a ghost.

A lifetime later fate intervenes. Basil, still in love with Elinor, is told her spirit lives on in a young woman. He's given another chance at life to prove great love can transcend anything, even death and time.

Excerpts from Heroes Live Forever
At the top of the stairs, goose bumps suddenly dotted Elinor’s skin and the hair on her arms stood on end. She glanced back, but didn’t see anything strange, or more to the point, Lucy’s ghost knight.
***
He turned her around and untied the laces of her dress. His fingers lingered at each sliver of exposed skin the open laces left. The gown fell away from her shoulders and rough palms eased the sleeves down, freeing the arms. He inched the dress over hips, unwrapping her like a gift, the silk pillowing at her feet like a bronze cloud.
***
Although she’d at times experienced the impression of déjà vu, the encounters left her feeling unsettled. Ian Cherlein was a stranger to her. This inexplicable, powerful sensation of familiarity for him bothered her more than the other déjà vu situations.

Journey in Time
TRAPPED IN TIME
London attorney, Shakira Constantine, finally agrees to spend the day with her handsome client, Alex Lancaster. While riding in the countryside, the couple finds themselves caught in a time warp and transported back to the 14th century, and an England preparing for war. Everyone believes Alex is the Baron Guy Guiscard...a baron who died in the upcoming battle.

If they can’t discover a way to return to the 21st century, Alex will have to sail with the army to certain death. Shakira will be left alone to survive in the alien and terrifying medieval world. 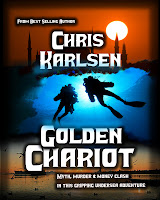 Myth, murder, and money clash in this gripping undersea adventure.

The rare discovery of a ship sunk during the time of the Trojan War has been found off the coast of Turkey, near Troy. Charlotte Dashiell is an American nautical archaeologist and thrilled to be part of the recovery team. The wreck may contain proof of her highly controversial theory about the Trojan War.

Charlotte is present when the Turkish government agent assigned to guard the site is murdered. Her possible involvement and a questionable connection to a private collector of black market relics bring her under suspicion. Atakan Vadim is the Turkish agent sent to investigate her. Unknown to either of them, the smuggler behind the murder plans to steal a valuable artifact and frame Charlotte for the theft...after they murder her.

Shouts of “fire” came from all sides of the camp. The west wind blew sparks in the direction of the lab. They could lose the entire camp, but not the lab, not the artifacts.
Charlotte grabbed an empty barrel from the fire line. She ran with it and started climbing the stairs to the shower stall’s water tank. A man’s large hand covered her mouth. His other hand brandished a gun. With the cold barrel to her ear, he walked her backwards down the few steps to the ground.
“Don’t scream.” Little-by-little his palm came away from her mouth.

I was born and raised in Chicago. My father was a history professor and my mother was, and is, a voracious reader. I grew up with a love of history and books.

My parents also love traveling, a passion they passed onto me. I wanted to see the places I read about, see the land and monuments from the time periods that fascinated me. I’ve had the good fortune to travel extensively throughout Europe, the Near East, and North Africa.

I am a retired police detective. I spent twenty-five years in law enforcement with two different agencies. My desire to write came in my early teens. After I retired, I decided to pursue that dream.

I currently live in the Pacific Northwest with my husband, four rescue dogs and a rescue horse.
Connect with Chris!
http://www.chrisKarlsen.com

Wow these books look really good! I love history and romance, so this is awesome! Thanks for the giveaway!

I love history and romance as well, which is inspiration for my books. You can see trailers for all my books on my website: www.chriskarlsen.com or book boards on my pinterest page.
Have a great weekend,
Chris K.

I want to thank MK and Black Lion for inviting me here today. I look forward to talking with everyone. I love to hear what everyone enjoys reading.
Chris K.

These books sound fantastic.Can't wait to read them. Put them on my wishlist.

Hi Joanne,
Thank you for "friending" me on FB. The cover isn't up on this site but the sequel to Golden Chariot was just released last week. It's called Byzantine Gold. The cover and trailer for it are on my website, along with excerpts.
I'm currently working on book three in the series that Heroes Live Forever and Journey in Time are from.
Chris
www.chriskarlsen.com

Hi Cathy,
Thank you for the compliment. I love Turkey and knew after the first time I went, I'd set a book there. The sequel to Golden Chariot is called Byzantine Gold and it moves from Paris to Istanbul to Cyprus.
Chris K.