Tour Wrap Up and Giveaway Winner: Coinage of Commitment.

If you missed it, you can still catch up!
Coinage of Commitment is  a story where characters are looking for something higher, richer, and longer lasting...
​​

Book Synopsis
Wayne and Nancy grow up on opposite sides of the country, each certain they must have love better than what others will settle for. Something stronger, something richer, something worth searching for. During the turbulent nineteen-sixties, they meet while he is attending blue-collar Drexel, and she is at neighboring, Ivy League Penn. Although irresistibly drawn to each other, they must overcome obstacles posed by the class and social differences that separate them, as well as opposition from both families, and later, a twist of fate that will be the cruelest test of all. Can they reach the emotional heights they seek? Can they overcome time's downward pulling inertia? Coinage of Commitment is dedicated to all who ever wondered about the altitude love might soar to.

Excerpt
​​Setup: Late Friday night, 1968, at Philadelphia’s 30th St. Subway Station. Wayne is looking from the trolley station, where he stands, to the adjacent subway train (El) platform.
​
As he watched absently, the girl from Sullivan’s came down the El station steps opposite him. She paused at the foot of the stairs, getting her bearings. Although adequate lighting bathed the platform, most riders took stock of others in the vicinity for safety’s sake. It was a natural precaution, instinctive for most, and especially important this late at night. She saw him, signaled recognition by a parting of her lips that was not quite a smile, then she lowered her gaze, turned, and strolled slowly out of sight to the other side of the stairway.

Seeing her again pricked him with an off-kilter joy, uplifting and refreshing, partly because she recognized and acknowledged him, but also because she seemed so buoyantly out of place down here, her bright beauty undefeated by the dank-smelling gloom of the subway. He smiled, turned away, and sauntered to the south side of the trolley platform. The minutes dragged, but no trolley car arrived. He began mentally composing a theme paper for his International Politics course, the only non-technical one he had that semester. Ideas came to him, prancing, and he thought of getting a notebook from his bag.

“Police! Help! Help me!” A woman’s screaming and it came from the El platform.
Thinking frantically of the girl, he ran to the north edge of the platform and jumped the foot or so that got him down onto the trolley tracks. A steel grate fence separated the two transit systems, but it had seen better days. A section was ajar, just ten feet to his left, and he swung it open enough to squeeze through.

Now things got difficult. The El platform was too high and far to jump to. The train tracks gleamed below him, the electrified rail closest, then the two steel tracks. He saw only one way to get there and didn’t slow down to analyze the risk. He threw his bag onto the opposite platform, then leaped forward, over the electrified rail, and down into the square trench that ran a foot and a half below and between the steel tracks. The platform loomed just above him, and the smell of ozone was stronger this close to the electrified rail—the one he must not fall back against. With his momentum still carrying forward from the jump, he kept moving, aware his footing and balance must be perfect. He reached up and grabbed the El platform edge, stepped up on the rail before him, then used his grip on the edge to lever himself up and onto the platform, landing on his right shoulder and side. Feeling no pain, he got to his feet and sprinted west down the platform toward the woman’s screams.

As he ran, he recalled what he had seen: the girl from Sullivan’s, a nondescript man, and three black youths: teens with their heads wrapped in dark bandannas, signifying…he knew not what. They were what fueled his urgency. Where was she? The commotion was still ahead of him.
He ran at top speed past the central vending area and spotted figures near the far steps. He could see her blond mane, somewhat disheveled now, and she stood with her arm across a shorter girl’s shoulder. The nondescript man ran up and joined them.

“He took my purse,” the other girl wailed. “I can’t believe I was so careless to let him get my purse that easily.”
“Oh, I’m sorry,” the blond girl said, her arm still across the smaller girl’s shoulder in comfort.
“All my ID. A credit card. And I just got my paycheck cashed today. How stupid can you get?”
Another woman came down the steps and joined the group. As Wayne approached and slowed, a balding, thirtyish-looking man passed him from behind, joined the scene, said he had heard the commotion from above, and that a companion had gone to the toll booths to get help. Then two of the black youths he had seen earlier ran up from the west.
“He high-tailed it onto the tracks,” said the shorter of the youths. “He’s got choice of Thirty-third Street trolley or Thirty-fourth Street El station, so it looks like we kiss that one good-bye. You know what I’m saying? The Fuzz’l never collar that dude now.”

As though on cue, a police officer, complete with German Shepherd, came down the steps and assumed authority. The third black youth also joined the crowd. Wayne held back, not seeing what he could contribute by his late arrival. The blond girl had seen his running approach. Or had she? Her gaze had flicked briefly in his direction, then back to her charge. The tension eased with collective relief, and the officer started questioning the stricken girl, unpacking a notebook as he spoke.

Wayne thought of how the blond girl continued to be too distracted to notice him, and he felt bemused by the irony of his situation. He had arrived about 7.2 seconds too late to be of any use, even to the wrong damsel in distress. His breathing slowed. Still not seeing anything he could contribute, he turned and walked slowly in the direction he had come. He needed to retrieve his bag from where he had tossed it onto the platform. When he got there, he picked up the bag and looked out over the gleaming tracks toward the trolley station. No way, he thought, realizing with a shiver the danger he had risked. The price of another transit token wasn’t nearly worth the peril. And then, as though to underscore the irony, his trolley arrived and then quickly departed. Oh well, might as well climb the stairs to the mid-level pay booths so he could get back down to the trolley station. He took his sweet time since he probably had at least a twenty-minute wait. He approached the corner of the stairway, trying to remember whether the trolleys discontinued service during the wee hours. Suddenly the blond girl stood in front of him, her eyes wide, her expression anxious.
“It just dawned on me,” she said. “How did you get over here?” 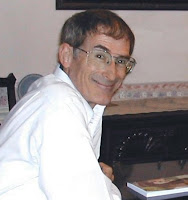 Rob Costelloe wrote fiction as a youngster, and completed his first novel a few years after college. But then the demands of family and career intervened, and his writing was mostly business or technical. But then in 2005, he read an Anita Shreve novel whose ending was so abruptly despairing that he felt outrage on behalf of so many abused readers. The result was two books, Coinage of Commitment, which became a National Indie Excellence Book Award finalist, and Pocket Piece Cameo, both published by Saga Books in the next three years.
Again he went off into nonfiction pursuits, but in 2012, he elected to rewrite both titles for the simple reason that he could make them better stories for his readers. Both titles have been published digitally, and are available from Amazon and other outlets.
​
Learn more about the author at: ​​​www.rcostelloe.com​​​​​​​

AND HERE WE HAVE OUR WINNER!
Tami you have 48hs to claim your prize. Otherwise I'll choose another winner!
I sent you an email :)