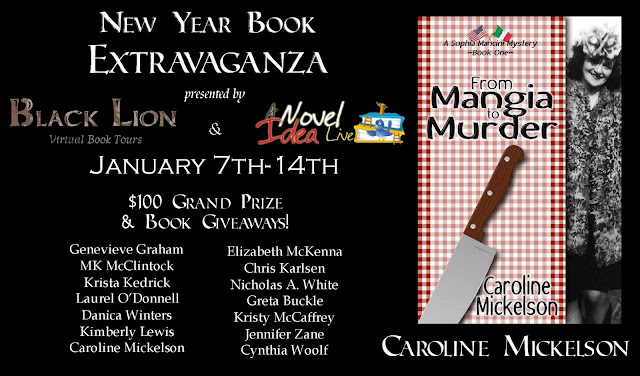 From Mangia to Murder 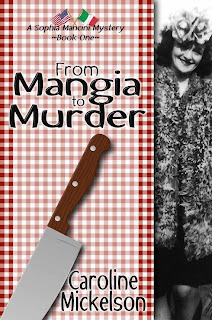 Little Italy, 1946 - Sophia Mancini would have enjoyed the grand opening celebration of her family's private detective agency if the volatile chef at Vincenzo's Ristorante had actually survived the meal. But before Sophia's chilled spoon hit the spumoni, someone plunged a knife into Vincenzo's back and the word on everyone's lips went from mangia to murder.

Sophia soon finds herself trailing crime boss Frankie Vidoni, chatting with his mouthy mistress Maria, and dodging henchman Mooch DiMuccio. She's suspicious of Vincenzo's widow, Stella, and his assistant chef, Eugene, because they don't appear the least bit dismayed by Vincenzo's passing. There is no conversation Sophia won't eavesdrop on, no question she won't ask, and no danger she won't face to find the killer.

Caroline Mickelson loves her family and loves to write. She also loves a good adventure, among her favorites thus far were attending graduate school in a Scottish castle, riding a camel around the Pyramids in Giza, and taking a best-in-a-lifetime road trip to Graceland. Caroline lives in the American southwest with her husband and their four children, affectionately known as The Miracles.


“Murder looks like our best option.” Sophia Mancini pushed her plate of cold uneaten pasta away. Murder was on her mind, not marinara. “I’ve been over this in my mind a million times, Angelo. We definitely need to add murder to our list.”
Her older brother let out a slow sigh and rubbed his eyes. “Murder is so complicated, sis. There are so many details to keep track of and you know it’s going to trip me up.”
“I’ll be right there with you.” Sophia reached over and squeezed his hand. “I can handle the details and no one will be the wiser.”
“So you’ll be the brains of the operation? And what does that make me? Just a pretty face?” He pushed away from the table, frustration etched on his.
Sophia poured more Chianti into her glass and then refilled her brother’s glass. “Don’t sell yourself short. Before the war you were a fine police officer and everyone here in Little Italy knows that.” She took a sip and quickly replaced the glass on the table. The wine tasted bitter but she knew it was just her own gnawing worry that was ruining an otherwise fine bottle of vino. “The Nazis are to blame for your injuries, not you. But you’ll be to blame if you don’t sit down, get serious and help find a way out of the mess we’re in.”


She waited while her brother settled himself across from her once again. He drained his wine glass and poured another, a sure sign that he was as worried as she was. Her brother wasn’t a drinker.
“Remind me what we’ve got so far, Sophia.”
“Theft, burglary, blackmail - the usual. But if we throw murder in I think it will really boost our reputation.” She met her brother’s gaze and winked. “It will give everyone something to talk about anyway.”
Angelo didn’t respond to her attempt at humor. This serious, sad man across from her was altogether different from the young, happy, confident man who’d shipped out to fight with the Allied forces three years ago. Home four months now, he was struggling with a head injury that had obliterated his short term memory and ability to retain details. If that wasn’t bad enough, he’d shipped out a married man with a beautiful young pregnant wife he loved beyond reason. He’d come home a widower to find that Luciano, his toddler son, didn’t know him from the milk man. Added to the pile of worry and stress, Angelo’s memory problems made returning to work as a police officer impossible. In turn prompted his in-laws, who had never approved of their daughter marrying an Italian-American beat cop, sued for custody of little Luciano.
What little Angelo hadn’t already lost, he now stood to lose. The judge granted them thirty days to prove they could start a viable business.
“Face it, Sophia, the Burkwaites have more power and more money than we’ll ever have.”
Tears pooled in Angelo’s eyes.
Anger burned in Sophia’s heart.
She grabbed her brother’s arm and shook him, desperate to snap him out of his sad state. His helplessness scared her more than her own rage did.
“Listen to me, Angelo, Charlotte’s family has all the money and power they need to threaten us. But we can give Luciano all of the love and devotion he needs. He’s your son, Angelo. He needs you to fight for him.”
She held her breath and waited for an answer. A single tear slid down his cheek. The only sound in the room was her brother’s heart breaking.
“Okay, Sophia, you win.” Angelo squared his shoulders. “I’ll do anything to keep Luciano at home with us.”
He refilled his glass and raised it.
Sophia grinned and raised hers.
“A la famigilia,” they toasted in unison. To the family.
“You’ll be with me every step of the way, Sophia?”
She nodded. “Just like always, Angelo. I’ll be right next to you or-” her spirits restored, she couldn’t resist teasing him, “a step ahead.”
“And with your plan the Burkwaites will never get custody of my son?”
“If they do, it will be over my dead body.”
“Let’s hope it doesn’t come to that.” He flashed her a smile that reminded her of the carefree pre-war brother she’d always counted as her best friend. “Now let me hear your plan again from start to end.” He reached for a notebook and pencil. “You talk, I’ll write.”
Sophia smiled. “You know, Angelo, this murder business could actually be kind of fun if we do it right.”

I Love Mystery Books. Thanks for the chance to win!

This book sounds fantastic. Thanks for the great excerpt.