Laurel O'Donnell's "Angel's Assassin": 10 Reasons Why We Should Read This Book! 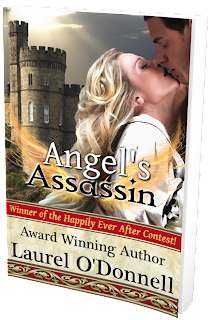 Damien is an assassin, a man with no home and a tortured past. Sold into slavery as a young boy, he is trained to kill with cold calculation, without remorse. As a reward for his ruthless success, he is given a chance to earn his freedom from his cruel master. One last mission. One final person to slay…

Lady Aurora of Acquitaine is the epitome of purity and goodness, beloved by all her people. She lives her life trying to atone for her mother’s cruelty by being a fair and just ruler. Secretly she fears that one day her mother’s murderer will return for her.

When Damien enters Aurora’s life, tempting her with promises of dark passion and forbidden lust, he threatens to tear her peaceful world apart.

Can Aurora’s light heal Damien’s dark spirit or will his evil consume her? The eternal battle of good versus evil, love versus hate, dark versus light, all come to a shattering climax in this historical romance set in medieval England.


Give us 10 reasons why we should read your book?
Damien is a super hot and confident alpha male
Aurora is a gentle and kind opposite to Damien’s brutal strength
Great ending (Angel’s Assassin won the Happily Ever After Contest)
Great beginning (Angel’s Assassin was nominated for over seven awards based on the beginning)
Page turning read (My Cozie Corner Book Reviews said “I found this book to be a page turner and recommend it to all romance fans.”
Thrilling adventure
Romance
Surprising twists
To close it and sigh with happiness
The power of love to redeem a tortured soul

Enjoy an excerpt from Angel's Assassin


She was more than stunning.  She was an angel.


She looked down at a beggar who held an old, feeble hand out to her, his gnarled fingers stained with mud.  Outrage filled Damien that this dirty, decrepit man should accost her in such a manner.  But the lady did not shy away from his filth.  She did not turn her back on him.  She smiled at him.  Damien found himself wishing he were the beggar, wishing he were the recipient of such radiance.  Then she bent forward, touched the beggar’s shoulder, and spoke earnestly to the old man.
Damien inched forward, ignoring the crush of people around him as he moved closer to this goddess.  He could not hear her words, but the people around her smiled.
The beggar nodded his head enthusiastically at the regal lady and smiled a toothless grin.
Lady Aurora turned and moved leisurely into the square.  Her blue velvet surcoat swished about her long legs.  The lone guard walked before her, keeping the path clear.
One guard to protect her, Damien thought, disgusted.  If he were her father, he would hire an army of men to trail her and keep her safe.
People called out to her now.  She paused and spoke to many, giving them her undivided attention.  What would she say to him if he called out to her?  Did he care?  No, he wouldn’t care what words she uttered.  All he wanted was to see those luminescent eyes turn to gaze at him with the same undivided attention she so graciously offered everyone else.
Out of the corner of his eye, he saw a movement.  A shadow.  A slithering shape.  He searched the crowd, the feeling of unease growing much stronger now, spreading across the nape of his neck and shoulders.  His gaze darted through the throng, focusing on one villager and then another.  A mother smiling down at her child.  A farmer speaking with a short baker.  A monk gazing at Lady Aurora.
And then, mixed in the crowd, Damien found him.  He was a small man, dressed in a faded green tunic.  He hunched slightly, moving slowly between people, being careful not to touch anyone, being careful not to draw attention to himself.  But unlike the people who surrounded him, there was no serenity in his face, no adoration.  Only dark purpose.  The man focused on Lady Aurora with the intensity of a predator.
Damien recognized him immediately.  He was one of Roke’s elite guards, a killer, and an assassin.  A slave of Warin Roke just like him.  Damien didn’t know his name, but he knew the face.  And he knew the ugly gleam of determination in his eyes as he trapped his prey in his sights.  What the devil is he doing here? Damien silently demanded as fierce anger blasted through him.  What game is Roke playing?
Damien moved through the crowd, inching closer to him, not taking his stare away from the stalker.  He bumped into a farmer half his size.  The man grumbled something, but Damien moved on, ignoring him, concentrating on his target.
“M’lady!”
Damien heard the gruff call, but did not look up to see who it was.  He didn’t dare take his gaze off the man, lest he lose him in the thick crowd of villagers.  Damien watched the man’s reaction.  He saw him hesitate, watched his small eyes shift from Aurora to somewhere off to the left where the other voice had originated.
For a moment, Damien thought the puny man would turn and leave.  Is he here to make sure I complete my mission?  His eyes slowly narrowed.  No, that was not the reason he was here.  He knew Warin Roke well, well enough to realize he would never send anyone to watch over him.
Something glinted in the little man’s hand.
Damien’s eyes widened in realization.  The man isn’t here to follow me.  He is here to steal my freedom!  Damn you to hell, Roke.
The killer bent his legs and sprang forward, moving with a quickness his small stature belied.  He moved straight for Lady Aurora, his dagger flashing in the fiery sunlight.


Giveaway
The author is giving away one copy of "Angel's Assassin" and one copy of her medieval romance, "The Angel and The Prince". 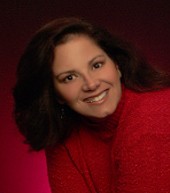 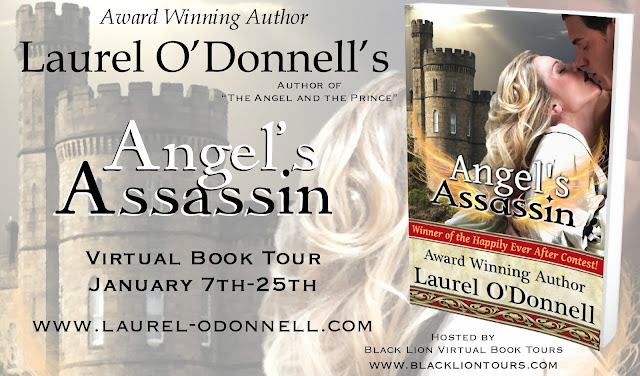 Thanks so much for the warm welcome. Hope everyone enjoys Angel's Assassin!
Laurel

We're thrilled to have you on tour with us Laurel! Those sound like pretty good reasons to read this book. :)

Readers: Laurel is also an author in the New Year Book Giveaway, so be sure to check it out and follow along with her tour!

Congrats on the new release. Angel's Assassin sounds fantastic. Can't wait to read itto see more of Damien and Aurora. Thanks for those ten reasons and the great excerpt.

Angel's Assasin sounds like a great read. I can't wait to see someone with a pure heart try to help someone who has lived a terrible life!