Sound of the Heart: Going on Tour with Author Genevieve Graham and a Tour Giveaway!

From Genevieve Graham, author of Under the Same Sky, comes a sweeping romantic historical novel of one man’s strange gift and dangerous battles . . . 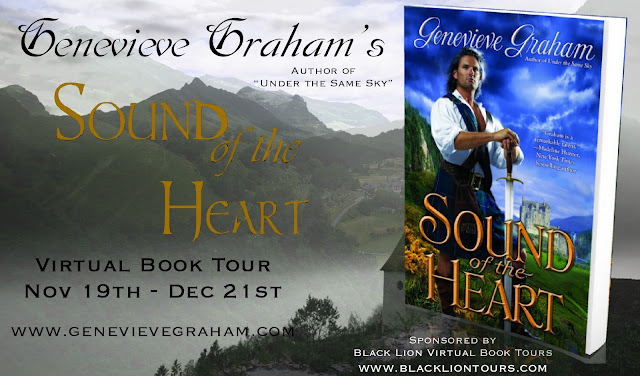 Dougal MacDonnell, a fierce warrior from the Highlands of Scotland, is able to hear the thoughts of other men and dream how the future will unfold. Devastated by the loss of his family during the Battle of Culloden in 1746, he fosters a deep hatred for the English. But when Glenna, the love of his life and a Scottish outlaw, is captured and shipped overseas, Dougal is forced to join an English army made of vanquished Scots. Now fighting on the side of his sworn enemies, he embarks on a journey that will take him across the seas to the colonies. There he will risk everything for the chance to find his true love.

Genevieve Graham graduated from the University of Toronto in 1986 with a Bachelor of Music in Performance (playing oboe). While on a ski vacation in Alberta she met a really cute guy in the chairlift line-up and they skied together for two days. After the second day she decided she had to have him . . . permanently. The couple (now husband & wife) subsequently moved to Calgary and brought two beautiful and talented daughters into the world. They have recently settled in a small, peaceful town in Nova Scotia and are loving their quiet life.
​
Writing became an essential part of Genevieve's life a few years ago, when she began to write her debut novel, "Under the Same Sky". Her second book, "Sound of the Heart" was released on May 1, 2012.
​
Learn more about Genevieve at: http://www.genevievegraham.com.

​Book Content
​The book contains attempted rape and rape. The situations are not overly done or vulgar.


An Excerpt
“How ye manage to be such a skilled hunter, I’ll ne’er understand,” she said. “I could hear ye breathin’ a mile away.”


“Ye’ve the ears of a squirrel,” he grumbled.
She nodded, then returned to her earlier line of questioning. “What were ye doin’ there?”
“I came to see . . . I was worried that . . . I thought maybe . . .” He winced, realising how pathetic he sounded. He leaned down to pluck a tiny purple flower from the grass and snapped the bloom between his fingers.
“You were worried? About me? Since when? After all ye’ve seen me do, ye’d ken that most of the time I’m just fine on my own, thank ye very much.” She glared at him. “I’m no’ delicate flower, Dougal MacDonnell.” She gestured toward the torn flower between his fingers. “I’m no’ shrinkin’ violet, either. If I’m a flower at all, I’m maybe . . .” She paused and grabbed the crushed flower from Dougal’s grip. “Maybe I’m a thistle. Ye’d best not squeeze me too hard.” She slid her knife back into its sheath, keeping shrewd eyes on him. “Ye know what? I’m sick o’ this, Dougal. O’ the way ye treat me these days. I’m no different, but ye are. What is it wi’ ye? Why do ye sneak around behind me all the time, watchin’? Why can ye no’ be yerself anymore?”
He shrugged. “I’ve no idea.”
“Ye’d best just say it,” she demanded. “For if ye dinna speak yer mind, this will never ease between us an’ it will end badly.”
“I canna say what I am thinkin’, because I dinna ken what it is.”
“Ye do.”
“I don’t.”
She shoved his shoulder and he stepped obligingly back. She came closer and pushed him again, harder this time. He frowned and his backward movement was less.
“That’s right,” she said. Her eyes glittered with anger. “I’m askin’ ye to be the man ye were. The man ye are now isna worth a pot to piss in. Ye dinna speak of anythin’ worthwhile, ye dinna laugh, ye dinna do anythin’! Ye’re dull as a stone!” She shoved him hard again. This time he tripped back, then stepped forward and grabbed her wrist, holding it in place.
“Don’t do this,” he said, almost pleading.
In response, she slapped his face with the hand he wasn’t holding. He shook his head to clear the sting, then grabbed that wrist as well. She leaned toward him, trying to put her face in front of his, but he was a foot taller. She hissed up at him through bared teeth.
“Do somethin’, Dougal MacDonnell. Dinna turn into some ninny. Do somethin’.”
“I dinna have to do anythin’. I’ve no need to prove myself.”
“Oh no? Then why is it ye’re spendin’ so much time talkin’ of things that dinna matter? Why do ye try to do more than ye did before? Ye need to show me what a big man ye are? Is that it?”
“No . . .” he said, but his voice lacked conviction.
She pressed even closer to him. Her voice lowered to a dangerous level, almost a whisper. Almost the sound he’d heard her make in her sleep. “Do ye think I canna take care o’ myself anymore? Is that why ye came out here jus’ now? Well, I can do jus’ fine on my own, sir. I heard ye comin’, an’ I’d hear that lot if they came within a mile o’ me.”
Dougal felt the air buzzing between them, felt the pulse hammering in her wrists beneath his fingertips. Her eyes were furious, glowering at him like blue flames, challenging him.
“What do ye want?” he demanded. “What do ye want me to do?”
“Anythin’! Just be the Dougal ye were, man. Dinna tend to me as if I were a child. I’m still me. Why aren’t you still you? Do something, Dougal. Do something!”
So he kissed her. He dropped her wrists and seized the sides of her face, bringing her lips to his. She pulled instinctively away, but he held on, kissing her mouth, slightly open with surprise. He touched the skin he had longed to touch ever since he’d first found out the truth about her. It was warm, hot even, because she was angry. He felt his own face warm as he sank into the kiss.
She was so small, just like she’d said. Despite what she claimed, the bones he held between his hands were so wee, so delicate, fitting into the palms of his hands like she was made to be there. He slid one hand down her back so it rested on her waist and pulled her snug against him. He felt her body adjust, felt her muscles bunch up in response. Yes! Yes, this was what he’d been wanting. His blood sang, tingling his fingers, dancing in his lips—
And she bit him. He yelped and stepped back, rubbing his lower lip.
“What—” he cried, but she was there first.
“What was that?” she shrieked.
Tour Giveaway!
$35 Amazon Gift Card. Readers may leave a blog post comment, but the winner will be chosen from the Rafflecopter!
Ends 12/21/2012
a Rafflecopter giveaway

I had the pleasure of reading this book and I can say that you are a great talent--nicely done Genevieve.

Welcome to the tour! Have a wonderful time!

Thanks so much, MK. And thank you to Black Lion tours for being so incredibly supportive and efficient!

Congrats on the new release. Sounds of the Heart sounds like a winner. Can't wait to read it. Thanks for the great excerpt and giveaway.

It does sound like a wonderful book. Good luck.
morgankwyatt at juno dot com

Thanks for this great giveaway.