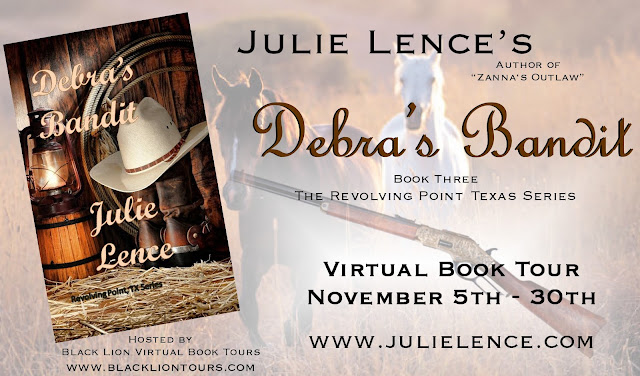 She’s going to find out what that something is and convince him there’s more to life than the tomfoolery of outrunning a posse. 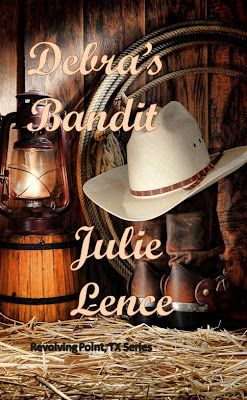 Forced to flee his home in Chicago, Gage Cantrell shed his greenhorn ways and joined an outlaw band. He’s spent the last six years dodging bullets and a Pinkerton determined to bring him to justice. Now that Gage has settled for a spell in Revolving Point, Texas, hoping to win the heart of the woman he loves, his past is about to catch up to him. Trouble is, Debra doesn’t know about Chicago. If she’ll forgive his cowardice on that fateful night, he’ll finally know peace. That is if he can thwart the Pinkerton and send him packing—for good.


Raised in the St. Louis orphanage, Debra Moore has known more hard times than good. Riding with her brother and Gage as they raided the west brought about a longing for a real home, and for Gage to return her love. She’s found a comfortable haven in Revolving Point and wants Gage to cease to his bandit ways and put down roots with her. But Gage has never been the settling type, and lately he’s been more secretive than usual. Something’s bothering him. She’s going to find out what that something is and convince him there’s more to life than the tomfoolery of outrunning a posse.

"You make it a habit of assessing other men?" Gage demanded. "What? No! He—Ow!" Tears welled in Debra's eyes and she dropped something into the water. "What is it?" He crowded close to her. "I cut my hand on a knife," she cried. "Let me see." He gently gripped her wrist and drew her hand toward him, seeing blood and soap suds trickle down her right palm. "It's a flesh wound." Wordlessly, he grabbed a towel from the drawer beside him and wrapped the cloth around her hand. He reached into the cabinet above him and took out a bottle of whiskey, removed the towel and poured a good amount of the rye over the cut. Rifling through the cabinet, he found a piece of linen and wrapped it around her palm, tying the ends off in a knot. “Keep the bandage on so the wound doesn’t fester.” Debra looked up at him. Tears swam in her copper eyes. Two fat drops spilled from the corner of her eye. He watched them trickle down her skin to her delicate jaw before returning his gaze to her watery eyes. Past the rest of the tears she tried to hold at bay he saw something else. A longing not to be ignored, to be loved by him as a man loves a woman. Something inside him shifted, the roots that had been planted long ago digging in deeper. He leaned toward her, telling himself he was only going to ease her discomfort…

Tour Giveaway!
Two copies of the book will be awarded to two commenters at the end of the tour.

I grew up in an average-size city in upstate New York. All through school I enjoyed writing as long as I could choose the topic. I even tried to write a novel length story in middle school, but since I was young I didn't stick with it all that long.

I met my husband during the latter part of 12th grade and married him two years later. He had already enlisted in the Air Force and I enjoyed accompanying him on his twenty years of service. By marrying young and entering the work force full-time, the writing bug didn't bite again until the early 90's when I read Double Standards by Judith McNaught. I was already hooked on the romance genre and family sagas, thanks to Johanna Lindsey's Malory family, and the little critter of a muse dug his teeth in deep. By combining my love for romance, family and the old west, I have settled into a career writing western historical romance.

Debra's Bandit is the third book in my Revolving Point, TX Series and features outlaw Gage Cantrell and mercantile overseer Debra Moore as the hero and heroine. Currently, I'm working on my next novel, a short story I hope to have out in time for the holiday season. I'm a stay-at-home mom who enjoys taking care of family and home, reading and anything to do with the American West. I also enjoy meeting other fans of the romance genre, so if you've got time, say hello at: https://www.facebook.com/#!/Julielence.
www.julielence.com
Amazon | Goodreads

Looking forward to your tour and book Debra! Nicely done on another book in this series!

Congrats on the new release. Debra's Bandit sounds fantastic. Can't wait to read it to see what happens between Debra and Gage and the Pinkerton man.

Thank you Black Lion for hosting this tour for me. I enjoy writing about cowboys and outlaws, and meeting fans of the romance genre. This is the perfect way to do so.

Hi Joanne: Nice to meet you here. Hope you enjoy the story. Gage was a lot of fun to work with.