Liz Matis: Going for it and Love by Design - Excerpts and giveaways

Today I'm happy to announce that LOVE BY DESIGN and GOING FOR IT are now available on AUDIOBOOKS.

For those who love spicy love stories...
... welcome LIZ MATIS!


*IMP: While the books are hot they are not considered erotica. When RT reviewed them they tagged Love By Design as Hot and Going For It as a Scorcher within Contemporary Romance.


LOVE by DESIGN
by Liz Matis 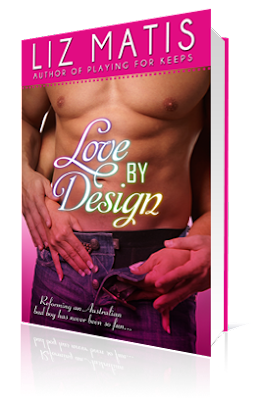 Design Intervention starts the second season with its own surprise makeover. Interior designer Victoria Bryce must break in her temporary co-host, Aussie Russ Rowland.
Victoria, former socialite wild child hopes the reality show will give her the clout to launch her own design line without her family connections. Russ, former bad boy Australian TV star is using the show to launch his acting career in the States.
Sparks fly on camera as they argue over paint colors and measurement mishaps leading to passions igniting behind the scenes. But when their pasts collide with the present will the foundation they built withstand the
final reveal?

PRAISE:
Readers will get a kick out of these characters as they walk through a world of fashion and celebrities and soak up all the glitz and glam that a wild child and a bad boy could possibly provide.
- RT Reviews -

The glossy ink blackness of her hair should’ve made the pale color of her skin appear washed out, but instead it shone like a South Sea pearl he once retrieved on a dive when he was twenty-six. Russ didn’t have to caress the elegant curve of her neck to see if she was just as smooth. But he wanted to.
The sharp angled cuts of her hair mirrored her cheekbones, contrasting with full soft lips tinted with pink gloss. He wondered if it was of the flavored variety. Cherry? No, not red enough. Bubblegum? She licked her lips as if he’d willed her to do so. Maybe he had.
Dressed all in black, from the killer spiked heels, leather skirt, and v-neck shirt, she resembled a comic book vixen. Except for the eyes. As clear blue as the waters off of Fraser Island, her eyes were like going through the New York steel jungle and coming upon Central Park. Unexpected, but welcomed. A haven. A haven?
“Russ, do you think you can handle that?” asked Brett Hartman.
“No worries.” With Victoria doing a walkabout inside his brain, he had no idea what Brett had said.
As beautiful as a comic book vixen and just as dangerous, easily leading a man to his nefarious end. You’d think he would’ve learned the lesson taught to him only a month ago, sending him a half a world away to start over. Russ always thought of himself as a smart guy, but one look at Victoria had dropped is IQ by a third and him behaving like the bad boy the Australian press made him out to be.
Not that he was a saint. Far from it. But he would never leave a woman at the altar because he’d never agree to arrive there in the first place. Just the word sent a shiver down his spine. To him, altar was synonymous with sacrifice, with his balls offered up to the matrimonial gods.
Much to his mum’s distress, Russ was a bachelor for life. Did that make him a bad

boy? No, but the things he wanted to do to Victoria’s body did.

GOING FOR IT
by Liz Matis 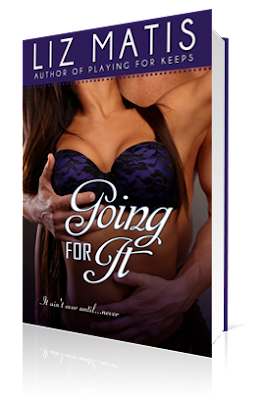 Pro football player Jake Miller’s game plan for winning back supermodel Hannah Hahn is play action
in the bedroom. But when he sees beyond the swimsuits and lingerie and she sees beyond his accolades and stats feelings of love blindside them both changing the rules of the game.

The paparazzi love the beauty and the beast couple but the tabloid rumors turn ugly and test the fragile trust between them. Will their celebrity egos block the way to true love?

Readers will wholeheartedly enjoy the cat-and-mouse game the main couple plays. Expect a large dose of spice, surprises, and a story that's perfect for the front page of a tabloid. The sequel to Playing For Keeps is a touchdown!
- RT Reviews -

She twirled out of the room pretending she was in the middle of a fairy tale. As long as she didn’t expect a happy ever after at the end she could pretend all she wanted.
“Your lat—”
Hannah performed her Red Carpet pose. The overhead lights danced off the sparkles of the deep pink dress. “You were saying?”
Jake slowly approached her—no, not so much as approached as in stalked. He reached out and curled a tendril escaping the upswept ponytail around his thick finger and rubbed the texture with his thumb. Then he stepped in closer. Hannah couldn’t speak, couldn’t move. He had frozen his prey and all he had to do was go in for the kill.
“You’re the beauty to my beast, Hannah.”
A thrill shot up her body and settled in her chest making it hard to breathe. Jake may act like a caveman from time to time, and though he sported an Armani black tuxedo with a dark, gray silk shirt he still looked like a bad boy, but he was no beast. He only proved her right when he unwound the strands and caressed her cheek as if she were a delicate orchid.
She leaned into the caress for a moment, savoring his touch on her skin, scared to tell him she thought he was gorgeous and sexy but then opened her eyes and bravely admitted, “You’re handsome.”
Jake’s tongue slid along his lips like a wolf ready to devour it’s prey. “I’m glad you think so, but I was referring to how I’m feeling on the inside.” 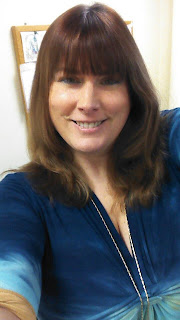 Liz Matis is a mild manner accountant by day and writes fun, flirty, fiery romances by night.
Both Playing For Keeps and Going For It, her popular football romances, hit the #1 spot on the Kindle Best Seller list in Sports Fiction. Playing For Keeps hit #26 overall in the Kindle store and #12 overall in the Nook Store.
In her spare time she enjoys reading, watching sports, and attending Zumba classes. She’s been married for 28 years and believes in happy ever after.
Fun Fact: Liz read her first romance at the age of fifteen and soon after wrote her first romances starring her friends and their latest crush!
Get to know more about Liz:


a Rafflecopter giveaway VISIT EACH STOP FOR A CHANCE TO WIN MORE PRIZES!


September 2:
I know that Book

Email ThisBlogThis!Share to TwitterShare to FacebookShare to Pinterest
Etiquetas: Contemporary Romance, Going for it, Liz Matis, Love by Design

Thanks for having me! Sorry I'm so late in posting. I was a Renaissance Faire all day yesterday and fell into bed exhausted as soon as I got home.