Tour Wrap Up and Giveaway Winners: Bound by Dragonsfyre.

I'm happy to announce the 3 winners of the giveaway.

If you missed this tour, check it here: 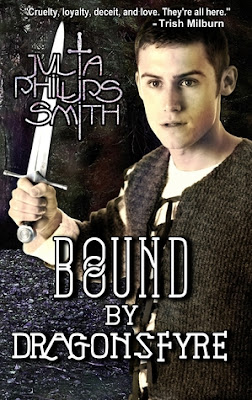 Book Synopsis
No one is safe when the dragon glides low over the Eighth Dominion. Not the high born who plot and spill blood. Not the low born who serve with one eye to the sky and the other glancing back.
Young Scorpius is fetched from the estate nursery, once raised to live among the nobility – claimed finally not by his family, but by a falconer to serve as his apprentice.
Scorpius soon learns that a noble hides his monstrous appetites beneath velvet and jewels, while the leathery-winged dragon is honest about his own. His master does his best to shield Scorpius from the world outside their cottage, but the falconer is merely a servant who must obey his own masters.
An attempt on the life of a young lord while on a hunt sends the falconer’s apprentice on an abruptly different path, bringing Scorpius into the service of the House of Pruzhnino. Court intrigue sinks its talons into everyone, even Scorpius–especially a former falconer’s apprentice once raised to be a lord in his own right.
​

​Read the reviews of this tour:
The 3 of them, loved it!

Julia Phiilips Smith has been telling stories since she figured out how to prop all of her dolls in a row, creating a wide-eyed and enraptured audience. A love of the arts led to passionate participation in dance, choir, musicals and plays. Her curiosity led to wearing as many hats as possible, from performing to stage managing and directing, from theatre to television and film.
After graduating from Ryerson Polytechnic University in Toronto with a Bachelor of Applied Arts in Film, she discovered there were stories bubbling to the surface that wanted to be novels.

Julia spent the next decade and a half learning the craft of novel writing.
She lives with her husband, their dog and her mom on Canada’s east coast, where the rugged sea and misty forests feed her thirst for gothic tales.
​
Learn more about the author at: ​​​​www.juliaphillipssmith.com​​

Excerpt
​​“Are you troubled, my lord?”
The young noble glanced quickly at Scorpius, fixing him with an appraising stare . After a long moment, Lord Thibault chuckled. “I dare say I have a dominion’s worth of trouble.”
“We’re pleased to offer this small consolation, then.”
“You know, ever since our last conversation, well…frankly, I’ve been dreaming about what it would have been like to have never been collected up from the nursery, as you were not.”
Scorpius looked at Lord Thibault, trying to gauge the young man’s mood before looking away in time to avoid eye contact. The noble gazed out over the woods, lost in troubled thought.
“Surely not, my lord,” Scorpius said finally.
“Do you even know what’s brewing?” Lord Thibault asked. He turned and looked at Scorpius as though the lighthearted noble who had arrived earlier had been merely a front for the sake of his companions.
Wishing he could dart a glance at his master for any kind of sign or direction, Scorpius took a breath, gathered himself and made his choice. “Can’t say that I do, my lord.”
Nodding his head toward Richolf, the noble said, “Wonder if he knows, and he just hasn’t told you.”
It was Scorpius’ turn to chuckle. “That would be just like him, my lord.”
“Really. Perhaps our masters aren’t very different after all.”
Hearing this noble try to bridge the gap between them made Scorpius’ heart ache with such unexpected force that he took a step back.
“Well, I shall tell you a little something, then. Something your master should know, if he doesn’t already.”
“My lord.” Scorpius looked into Lord Thibault’s eyes, surprised to see the depth of weariness suddenly exposed.
“The Troubles have begun.” Lord Thibault’s voice caught as he said it. He blinked rapidly and looked away.
It all made sense now.
His master had not glared at him when Lord Thibault swept Scorpius to the hunt, leaving the rest of his retinue behind. That look had been a warning, the only kind permitted between a falconer and his apprentice.
Beware.
Suddenly Scorpius’ hands shook. His master seemed so very far away across the field, rather than not far enough.
Lord Thibault swiped a hand across his face, turning to gaze at Scorpius. It no longer seemed possible that they were close in age, not with the weight that seemed to bear down upon the noble.
Memories tumbled forward, stopping Scorpius’ breath.
They jumbled through his mind–a noble’s rod slicing the back of Scorpius’ head, the lords fighting on the doorstep, the sword plunging into the royal brother. They were all part of The Troubles, weren’t they?
Across the field, Richolf appeared to be calmly collecting the braces of game, but he was staring over at Scorpius. Was he trying to tell him something, give him some further warning?
His master still carried the wounds from those days and nights of torture. He’d been put to the question because the royal brothers had decided the falconer’s cottage was tucked away enough to settle their score out here. Nothing to do with the falconer, and yet his body held the torment even now.
Of course, not even that could compare to the Hunt of Screams.
Scorpius met Lord Thibault’s gaze, suddenly angered by the noble’s tears. “The Troubles, my lord?” he said, his voice tight as he fought to control himself. “Yes they’ve made their presence known, even to those who try to live apart from them.”
Once again, instead of taking offense to such a tone from a falconer’s boy, Lord Thibault dropped his reserve even lower. “Am I in danger here?” he asked plainly, staring deeply into Scorpius’ eyes.
Glancing over at his master, he saw his attempts to gather the courtiers and head from the field. Yet there were two laggards.
Scorpius busied himself with his own braces of game. “My master warns of it, my lord.”
Lord Thibault started to turn, to look toward the others.
“Don’t!” Scorpius hissed.
The noble froze.
“Carry on as you would, my lord,” Scorpius ordered, not caring that he did so. He risked another glance as he crouched to tie the games hens together. Those two courtiers bent their heads together. More to the point, one glanced in Lord Thibault’s direction.
“We must run for it.” Scorpius stopped his work but remained in position. “Will you do it?”
He wished he could look at Lord Thibault, but doing so now would plunge the knife in.
“Where do we go?” the noble said, his voice calmer now that it had come to this.
“They are in my forest, my lord. I know these trees, I know the hills, and they do not. Just follow me.”
Scorpius rose, leaving the brace of game and catching Lord Thibault’s eye. At his nod, they bolted toward the treeline.

It was a pleasure to have you touring with us Julia! I hope to see you again soon!

I had so much fun with your tour -- definitely looking forward to the next one.

Congratulations to Adela, Cassandra and Alenette!

That's awesome Julia! I'll send you the emails of the winners ASAP!