Today we welcome author Jill Hughey and her book "VAIN".
An amazing  historical romance set in Charlemagne's empire in the 830s.
And the third instalment in the "Evolution Series" 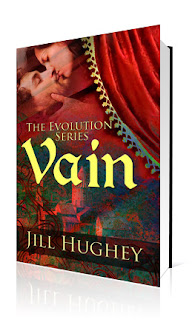 Lily had her life planned, neat and tidy as thread on a spindle, until her mother died and her father snipped at the seams of her future by abandoning Lily in their shop. A nobleman unexpectedly gives her hope when he brings fabric for a special garment. Lily survives on his first payment, and immerses herself in sewing and embroidering an incomparable garment for him, as her tidy plan continues to unravel.
​
Theophilus, Lord of Ribeauville, takes his responsibility to his townspeople seriously and, therefore, does not dally with local women. Desire wars with duty when Lily glances up at him while adjusting the hem on his Easter tunic. As her deteriorating circumstances push them together, Theo and Lily learn that the path to his heart just might be through his wardrobe, though the exquisite outfit she creates is the only part of her that fits in his precarious aristocratic world.
​
​

PRAISES FOR "VAIN":
It seems to me that the first review usually gives a synopsis, but that is not my style.
After getting the first book in The Evolution Series, Unbidden, for free when it was offered, I immediately bought, and loved, the next two. The entire series is excellent, but this is the best (however, much more enjoyable if you read the first book that laid the foundation for Theo's character.)
The characters were so rich and believable in this book, one of the best aspects of Jill Hughey's books. They struggle, they learn lessons, and of course are perfect for each other and fall in love.
This book made me laugh out loud several times. It lacks the violent aspects of the first two books but is oh so fitting for Theo, who while being a warrior is more of a politician and aristocrat. This book will also shock you. Theo can be a genuine bastard at times. It can also touch your heart, engage your sympathies and be uplifted.
The historical references are superb, the pacing wonderful, with perfect attention paid to foreshadowing, plot turns and human growth.
I love it! I have no idea how this author has remained independent, the publishing world is missing out on one of it's greatest diamonds.
- M. Palmer (Amazon)-

Excerpt
​​Lily did not know what had changed. For just a moment, her lord had appeared angry, and now he jerked at the tunic like it did not fit properly when, in fact, she had done admirably well. “Please, my lord,” she interjected when the pins and threads tacking the tops of the shoulder became visible between the pieces of fabric. “You do not have to decide now. You also do not have to destroy it. I will fix whatever has displeased you.”
He froze. His hazel eyes, heated instead of droopy with kindness, flicked onto her. “Will you?”
She retreated another step, unsure of his meaning. The distrust on his face oddly combined with sudden, intense interest. This fitting had become very strange. Her insides had sparkled when she touched him. Could he have sensed that? “My lord, if you are satisfied with the general fit, I will have plenty of work to do. You can decide about the sleeves and hem another day.”
He straightened, finally letting the hem drop, but kept his narrowed eyes on her. “I like the sleeve where you have it. I am undecided on the hem,” he finally intoned with careful enunciation.
She lifted her hand to indicate his arm. “Can I just mark it, sir? The roll will come undone when you take the tunic off.” His eyes narrowed even further. He nodded curtly. She scurried to find her chalk and made one quick streak of white on the sleeve. “Should I help you?” she asked, trying to recover their professional manner of dealing with one another.
“No. Wait outside while I change,” he ordered.
Oh, dear. She rushed out the door, flustered. What had happened? Everything had been fine until she’d begun making adjustments to his hem. That had felt horribly awkward to her. Had it bothered him too? She had been trying to do her job briskly, just as her father had always done. Maybe a man did not mind another man touching his hem but very much minded a woman doing so. Lily sighed, pressing her back against the wall, then resting her head there, as well. Even though she occupied the same world she always had, every day brought unforeseen and unfamiliar questions and challenges. She did her best to guess and fool her way through it all. In truth, the only time she felt comfortable in her own skin was when she worked on the lord’s tunic. Or at least she felt comfortable when her lord was not in the tunic as she worked on it.
She sighed. If only her father had returned. He would have that hem rolled and marked in a thrice. He would explain Riculf. He would talk to Cluny and set her life on the right course again.
Her lord emerged, once again smartly attired in the green tunic and mantle she had sewn last spring about this time. He did not know she had sewn it. Her father had done the fitting. She had made every cut and stitch. “Father is never coming back, is he?” she blurted.
The question did not surprise him. He stood straight and proud and confident in his own comfortable life. “Not soon enough,” he said.
At first she did not understand the answer. Then it clicked. Not soon enough to help you. Not soon enough to manage Riculf or Cluny. Not soon enough to return you to normalcy or even respectability. “He lives with a woman?” she asked, eager to familiarize herself with all the ugliness at once.
Her lord cursed softly under his breath. “Yes. He misses your mother desperately.”
Her hand flew up, and she pressed the back of it to her mouth, stifling an unwanted sob of distress. She turned away to compose herself. “It must be very difficult for him,” she observed with the feeling of seeing things from a great distance.
“I did try, Lily. I reminded him of his duty to you. I reminded him of your mother. I tried every argument.”
Unwarranted resentment boiled up in her. Who was this Theophilus to involve himself in her life? Why should she feel gratitude when he stood so calmly to tell her how bad things were? Why should he be allowed to make her uncomfortable in her own shop? How dare he? She bit the inside of her cheek against the angry, unfair slander she wished to shout at him. “Thank you, my lord,” she gritted as meekly as she could manage. “I appreciate your efforts today. I am sure you have pleasanter plans for tomorrow. Now, I must continue my work.”
She forced herself stiffly through the door. She did not close it until she heard her lord’s retreating footsteps. The tunic waited, lovingly spread on the worktable. Her strange, quick anger receded, replaced with the more sane and familiar despair. Her fingertip traced across the slightly overlarge shoulder to the clever neckline. This neckline was the only perfect thing left in the entire world, as near as she could tell. Tonight, she would rework the shoulders. Tomorrow, she would sew the pleats and join the body pieces and sleeves. Soon, she promised herself, she would make tiny invisible stitches around this neckline, and that would be one right thing. And she must consider the embroidery. She must devote some time to the pattern.
Blessedly immersed in her work, she did not let herself think about Father anymore. 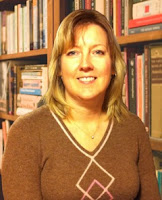 Jill Hughey has loved historical romance since sneaking peeks at her mother’s library years ago. She has enjoyed writing just as long.  She prides herself on deep character development, and settings that take her readers on long, satisfying journeys to places they have probably never been in a book before.
Jill lives in Pennsylvania with her husband and two sons. Her hobby is singing lessons, in which she studies classical soprano and some lighthearted works.
​
Learn more about the author at: ​​​http://jillhughey.blogspot.com

April 4: Love in a Book: Review and Top Ten List.

Let's get this show on the road! I'm excited, can you tell?

Good luck with the blog tour! You must have done a ton of research to write about that era. I'm adding Vain to my TBR pile. I tweeted to my list... wishing you lots of success!

Best of Luck with this tour Jill!

Definitely romance! I love a good emotional connection between characters that turns to love.

Thanks for stopping by everybody! I hope you'll continue to follow the tour.

I like a little bit of adventure. It doesn't have to be fantasy though - there is much adventure to be had in a contemporary setting!

Hope you have a wonderful tour Jill! :)
Definitely Romance. -Just add some (drama), adventure and action.....And. It's Perfect!