Loyalty:
A mob story on the surface, but a metaphysical saga deeper within the pages, "Loyalty" begins when the power struggles between Mobsters and Gangsters of Chicago's underworld are forever changed by an affair between Italian mob boss, Frank Cipriano, and the wife of African American gangster, Jonathan Casey. When Anna gives birth to Frank's daughter, Jasmine, the Cipriano and Casey family ties bind Chicago's underworld for generations to come. Through tragedies and triumphs, loyalties are constantly questioned, but more so when Jasmine grows into a deadly beauty. As a hit woman for the Cipriano family, but with siblings ties to the Casey family, Jasmine is torn until the very end. Readers seeking a deeper challenge in their reading experience can take the metaphysical challenge of reading this money power trilogy as a novel that takes your mind as far as you will allow it to go. 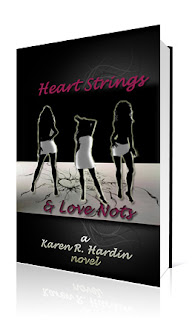 Heart Strings and Love Nots:
﻿﻿Three diaries in one novel, “Heart Strings and Love Nots” is a comical drama of the heart-breaking yet life affirming love stories of three women. With different personalities the unlikely trio of best-friends are the perfect voices of reason for one another as the bossy bitch, Dominique, judgmental diva, Skylar and freaky church mouse, Reese, take readers on a journey of illicit affairs, strange religion, accidental prostitution all the way to marriage and motherhood. 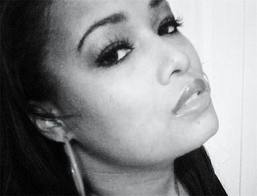 Karen R. Hardin has been hailed as a creative genius. With an imagination that developed from the sheer need to escape childhood abuse, her cultivation of higher consciousness at a young age brought forth unparalleled and unmatched artistry. She's turned out multiple scripts for indie film producers. One such script was written in a 24 hour period and helped to initiate the start of Derrty Entertainment's spinoff company UCME Films. Karen began her writing career with a dream that brought forth her first novel “Loyalty”, an epic mafia story. In 2012 Karen released a second novel “Heart Strings and Love Nots” with an eclectic take on novel writing, she created a southern sex in the city that blends three character diaries with perspectives based on some of the strongest stereotypical perspectives associated with women.

﻿Chapter 1It was a quiet Sunday afternoon when Anna Casey made her first visit to the Cipriano mansion. She was less than pleased to see her sister wearing a food stained apron when she greeted her at the door. Thoughts of a mausoleum crossed her mind as she was led through the foyer into the kitchen. Immediately hit by the warmth of boiling pots and multiple hot ovens, Anna removed her sunglasses. She placed her hands on her hips and tapped her foot as if she were demanding an explanation.Abigail Williams pulled a large trash can to the middle of the kitchen floor and placed two stools on opposing sides. She watched her sister, Anna, become increasingly agitated at the sight of her older sibling working as a servant. Anna folded her arms and smacked her lips trying to provoke Abigail into allowing her to speak her mind. She only got silent glances in return. Abigail opened two sacks of potatoes and took two paring knives from the drawer. She laid one on the counter in front of Anna and took a seat, “If you want to talk, you have to work.”Certain this would be the only invitation to speak up, Anna took the knife, “I don’t understand why you want to be some white man's maid,” she paused for a reaction, but Abigail only gave another disapproving glance as she peeled potatoes with the speed of a pro. “Humph, you can be my maid, at least we're family,” Anna took her seat and leaned over the trash can with potato and knife in hand. “Jonathan has plenty of money. We can take care of you. You really don't have to work at all.”Abigail found herself in deep thought as she watched her sister mishandling the potato like only a housewife with a maid would. Anna paused and sighed heavily to make way for another comment, but Abigail cut her off, “I do not want to live off my little sister and her crooked husband.”“Wait a minute now” Anna carelessly flung her knife side to side talking with her hands, “John is no more crooked than your boss, and when I say boss I mean Boss.”“Be careful with that knife!”“Girl, you know you working for the Mob.”“This family has been good to me.”“But they’re not your family and this is not home.”“I have my own quarters, and when I finish my work, it's just like going home. I’m happy here, besides Rosa really needs me.”“Lord, my sister has quarters,” Anna threw her hands up in a fake moment of praise. “You went from head nurse to babysitting a mental case all because you felt sorry for her. And calling her Rosa like she’s your friend?”“She is.”“No. If she was your friend somebody else would be peeling these damn potatoes, and you’d be out shopping with her.”“Anna, she’s been through a lot, and she needs someone to care for her,” Abigail put down her potato and knife to turn off the ovens and lower the heat on the boiling pots. She poured pasta into the strainer, removed two pies, a pot roast and a cake from the ovens without breaking a sweat. Then took her seat and picked up another potato.“That’s what her husband is for,” Anna continued to reason, “but I guess he’s too busy taking care of people for real, if you know what I mean.”“Mr. Cipriano is a good man. You shouldn’t believe all the rumors you hear about him”“Mr. Cipriano, humph, you mean The Don,” Anna chuckled at her own wit, “or The Godfather.”“And what is John but a street punk turned so called gangster?”“Wait a minute now, John is a good man. He provides and cares for his family. He takes good care of us. He would take care of you too if you’d come live with us where you belong.”A devout Christian, Abigail had chosen a life of hard work and taking care of others including Anna, who never had to work a day in her life. As a spoiled housewife with a “take care of your own” attitude, Anna was often at odds with her older sibling.At first glance no one would think they were associates let alone sisters. Abigail’s homely appearance and serious demeanor toned down her beauty leaving her in the shadowed of Anna’s gregarious nature and flamboyant style. They shared the same features and long wavy hair, but Abigail’s dark almond skin made her an exotic beauty that Anna’s fair complexion and cat like eyes could have easily paled in comparison to.With her hair locked away in a tight bun and her hazel green eyes hidden behind black rimmed reading glasses, Abigail was easily overlooked. Anna, on the other hand, tossed her wavy locks and batted her long eyelashes every chance she got. The attention seeking beauty made men stop in their tracks.“Give me that,” Abigail quickly removed the knife from Anna’s wailing hand before it accidentally became a deadly weapon. “I don't need to be taken care of. Besides, if both of us were living with Jonathan, where would you run when he's being a tyrant?”Anna’s composure quickly changed from self assured offender to insecure defendant. She looked Abigail in the eye and confessed, “Abby, tyrant isn’t the word…lately he’s just been absent,” she exhaled with relief now that they were getting to the true topic at hand, her. She paused in deep thought then proceeded to seek counsel, “Don’t get me wrong, I love him, but-”

Reese"I can't feel my legs," Dominique moaned and groaned.She had a nerve!!It was 10:00 p.m., something below zero on New Year’s Eve and there I was freezing my butt off in front of a shady night club surrounded by corn fields. The line wasn’t moving at all. I was pissed!I cut my eyes to my right glaring at my best friend, Dominique. It was her bright idea to bring in the New Year at a night club in the middle of nowhere. On the other side of Dom was our other best friend, Skylar, looking just as frustrated as I was. This was not how I was supposed to bring in the New Year.My mind drifted to the midnight watch service I was missing at Church. I wondered how many people noticed my absence, particularly if Pastor Terry had since his last sermon was all about how Christians should bring in the New Year praising God… not the D.J. He speculated that some of our members would be doing just what I was doing, “standing in line at a night club, checking our watches, and praying that we make it in before midnight as if our Savior was waiting inside”.If Pastor Terry didn’t notice I was M.I.A, certainly my mother and grandmother did. They were probably urging him to put me in his next sermon…they always had suggestions on what he should preach about. I started working through my alibi in my head, trying to figure out how not to lie without telling the truth. But it was a no win situation. My grandmother would just ask random but direct questions that require direct answers and my mother would make wild accusations until their combined forces made me confess."It's too freakin’ cold to be out here," Skylar’s grumblings broke my concentration."We should just go," I suggested as soon as I saw my window of opportunity to get Skylar to talk Dominique into leaving, "There's no way we're getting in, and I don't want to bring in the New Year standing in line," I thought I made perfectly good sense, but from the look on Dominique's face, I was speaking gibberish…I knew I should’ve driven my car.“Check him out,” ignoring me, Dominique turned to Skylar and pointed to a very unattractive man sitting in a really nice car, “Boss,” she smiled.“I doubted it,” Skylar frowned, “more like perpetrator.”That’s when I knew I wasn’t going anywhere. Dominique had just regressed to her early twenties and took Skylar with her. So, I made the most of the situation and began to pray for the lost souls in the parking lot like a mature Christian would. When I felt the Spirit move upon me…I knew I was doing the right thing. With my eyes closed and my thoughts pressed towards God, I blocked out the noise around me. It wasn’t easy with the overlapping secular music and all the random conversations seasoned with unnecessary cuss words. Everyone around me was restless and I had hell’s noise to contend with, but with the Lord’s help I was able to bow my head in a moment of silent prayer.“Damn…you embarrassing!!” Dominique’s outburst instantly broke my connection to Heaven. “You not in Church,” she snapped, “Christians ain’t even supposed to celebrate a New Year, it’s a pagan ritual,” she couldn’t resist adding some of her faithless facts.“Leave her alone,” Skylar defended my right to be openly Christian.I didn’t say a word to Dominique. I didn’t have to. The Bible tells us not to cast our pearls before swine…meaning don’t argue the Word of God with nonbelievers and Dominique had to be the biggest swine of them all. She was always ready to challenge any Christian with the truth as she knew it.  She was really good at twisting things around. If I told her I’m saved by my faith, she’d tell me that the Bible says to worship God in truth, and go on to explain how Christians act more like Pagans…especially at Christmas. I had yet to figure out how to explain my faith as being the truth, but deep down inside, I knew that it was.