Tour Kick- off: The Hot Shots by Stephanie Queen.

Today we are happy to welcome author Stephanie Queen!

For those fans of Romantic suspense comes her last work: 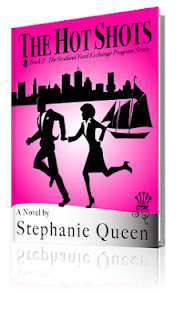 Decorator Sophia Alano’s burgeoning career gets side-tracked from the moment she meets hot shot Scotland Yard detective Chauncey Miller. On the run in Boston, Chauncey must now protect this spitfire Pixie from the madman out for revenge against him. But once he catches their would-be killer, Sophia’ chance to be a TV decorating show host doesn’t seem so exciting any more.

PRAISE FOR "THE HOT SHOTS":
"Stephanie Queen came through with her promise of another great book in the series of the Scotland Yard Exchange. The characters came through as fun loving, yet down to earth. I love the setting of Boston, it brings back great memories for me.
Thanks for another great read, Stephanie, queen of romance novels that are uplifting and quirky!" Stella - Amazon

Excerpt
Chapter One Excerpt:
“I have a favor to ask,” Grace said from behind her desk, pencil in hand and dimple in place. “I need you to pick up David’s latest recruit from Scotland Yard at Logan Airport and keep him busy for the day. Show him around.”
Sophia couldn’t stop her usual sarcasm in spite of the fact that Grace was her boss as well as her best friend. This so-called favor made no sense. Even for Grace.
“Are you serious?” Sophia planted her hands on her hips. “Let me make sure I understand you--You’re asking me to babysit one of David’s Scotland Yard hot shots on the eve of my possible career breakthrough?”
Grace nodded. Her big blue eyes were wide and honest. Something was up.
“That’s crazy talk. Tomorrow’s the shoot for the audition tape.” Sophia knew that Grace knew this since Grace helped set it up for her, but she felt it was worth mentioning the obvious.
“Yes. I know.” Grace smiled then looked back down at her drawing. “And a distraction is exactly what you need to keep your nerves at bay.”
“What? My nerves are fine.” If her dam voice hadn’t squeaked at that moment, she’d have been more convincing. Something was definitely up. And Sophia would never admit it to Grace, but she did feel a bit edgy--if edginess included nausea, headaches and sleeplessness.
“I know you.” Grace paused and gave her the serious-yet-loving older-sister type look that she mostly put up with. “This will be good for you and…and I’d really appreciate it.”
Grace was playing dirty pool now with that appreciation bit, but Sophia still didn’t buy it.
“And what if I didn’t have time today?  Were you going to tear me away from my project?”
“Actually, yes.  I wasn’t going to mention it, but some of the men were complaining about your presence at the set and asked me to have you back off just a smidge.” Grace scrunched her brow. “But don’t worry, honey, they think you’re wonderful. It’s just lately...”
“Great. That’s great.” Her hands flew into the air. “I got painters and paperhangers and carpenters talking to my boss behind my back.” This was not good. She plunked herself on the edge of Grace’s desk and folded her arms. She tried staring at the stack of fabric samples on the other side of the office so Grace wouldn’t notice if a tear slipped out. Because, damn it, she might be on the brink of crying.
Grace picked up the box of tissues and handed it to her. “You’ll be alright, Pixie honey. This is the perfect way to get your mind off everything to do with decorating and the design show audition filming and TV cameras. I’m asking for a one-day one-shot favor.”
Grace’s voice sounded a little too sweet, even for her, and “Pixie honey” or no “Pixie honey”, that was cause for suspicion.  She blew her nose. Okay, so maybe she needed a break, but she wasn’t convinced that playing tour guide to some British guy fresh off the boat...or rather airline--was the way to go.
“I’m saving up my vacation time and I don’t think you have the authority to assign me to pick up some random guy at Logan Airport and show him around town while I’m on the clock.  We’re in the decorating business.”   She remained seated on the edge of Grace’s desk, tossed the balled-up tissue in a basket halfway across the small office and re-folded her arms.  “Besides it doesn’t even sound safe.”   She blew the blunt-cut bangs off her forehead for emphasis.
Grace looked at her with that smile and said, “He’s from Scotland Yard, honey.  Of course it’s safe.  It’ll be fun.  I don’t know what you’re worried about.” Her face brightened and she added, “You don’t have to use vacation time. Consider it a client recruitment assignment.”  Grace went back to the sketch she’d been working on.
Sophia looked at her best friend and boss with a suspicious squint.  What it sounded like to her was another one of Grace’s blind date set-ups in disguise.

Stephanie Queen lives in bucolic New Hampshire where writing happy, snappy romances takes most of her time. However you can also find her watching UConn football and basketball games whenever they’re on TV, and sometimes even in person. Right now, she’s busy writing her next book in the Scotland Yard Exchange Program Series.
Learn more about the author at: www.stephaniequeen.com

Tour-wide giveaway of books 1 & 2 of "The Scotland Yard Program Series: The Throwbacks and The Hot Shots plus a $10 Amazon GC for 1 lucky winner!

Good luck on the tour.

I wish you a great tour!