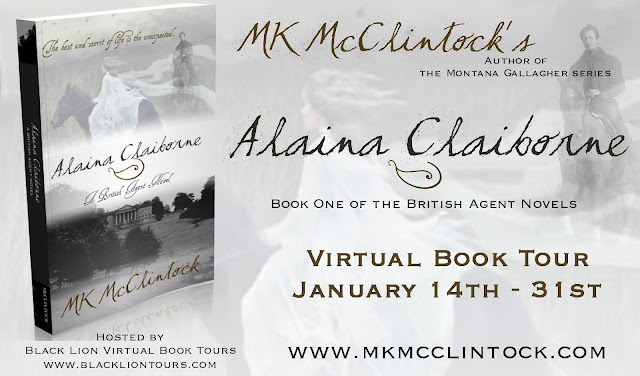 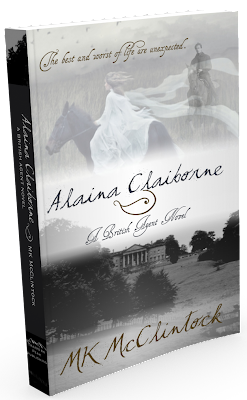 How far would you go to avenge your family and save the one you love?

In nineteenth-century England, Alaina Claiborne had a loving family, a cherished friend, and devoted servants. She spent her days riding across the grassy hills of the English countryside, joyful and at peace.

Then tragedy strikes and her world is forever changed. Searching for those responsible is her only focus . . . until she meets Tristan.

Tristan Sheffield, a man of many talents, searches out those who don’t want to be found. His past is filled with secrets and deeds he would rather leave deeply buried. However, when his life unexpectedly entwines with Alaina's, he soon discovers they share more than a mutual desire to catch a murderer.

On their hunt for a man driven by greed, Tristan and Alaina find that love is the greatest weapon against evil, and they'll stop at nothing to survive.


10 Reasons Why You Should Read This Book
Three handsome and charming British Agents, and
The strong, feisty, and beautiful heroine who brings them together.
You’ll sail the high seas, and
Ride in a speeding carriage.
Meet a woman who’s not afraid to use a gun or race a stallion, and
Meet the man who wins her heart.
Romance
Adventure
Mystery
Humor

Bonus:
You’ll fall in love . . . more than once.
Enjoy Excerpts from Alaina Claiborne
(Excerpts may or may not be in the order in which they appear, and may differ slightly from the final book.)


Excerpt One:
Tristan had spent months negotiating with the lord, who decided to hold out for all he could the moment he realized who was interested in the property. Apparently, Lord Melbourne had been so deep in debt that he had no choice but to sell off his ancestral estate. Tristan knew a desperate man when he saw one and Lord Melbourne had been desperate. He eventually yielded to Tristan’s way of thinking and settled on a fair price. Tristan was happy to be rid of the man and even more pleased to find the daughter of Melbourne’s deceased neighbor in his own backyard. Tristan studied the object of his thoughts for a moment longer, trying to catch another glimpse of those revealing eyes. She declined to look at him, but he wanted a reaction from her—any kind of reaction would please him.
“It seems we will be neighbors.” He realized he had blundered when her spine stiffened and she turned toward him. Anger marred her lovely face, and he guessed she likely suffered from temper when the mood struck, as it seemed to be doing now.
“You, sir, may now own this property, but I assure you we will be neighbors in no other way except that we share a border. I see no reason why we should ever meet again.” With her back stiff and head held high, she turned to her impressively large stallion and mounted with surprising ease, her riding habit no hindrance to her. He wondered if she rode with as much confidence as she showed him right now—he thought she probably did.
“There is no reason why we can’t be civil to one another, Alaina. After all, I now own half of your favorite lake.” He couldn’t seem to stop saying all of the wrong things, but he was enjoying himself. She stared down at him from her elevated height and looked him over with a mixture of what he thought to be disgust and perhaps admiration. But there was only anger behind her next words.
“I have plenty of ponds on my own property.”
“Then why are you here?”
“That, sir, is none of your business.” She turned the horse, spurred him forward, and once she broke through the trees, she sent the horse into a suicidal run, one which she surprisingly had complete control over. Tristan followed her with his eyes until she rode over the hill and out of sight.
“Interesting,” he murmured. “A most interesting woman.” He turned to his horse and stroked his muzzle. “What do you think, Admiral?”
The horse whinnied and nodded his head. “I agree, old boy,” he murmured and his gaze returned to the hill where she had been moments before. “I agree.” Tristan mounted his horse with equal ease and turned to continue the inspection of his property.

Excerpt Two:
Across the acres, darkness enveloped Alaina, her surroundings illuminated by the flickering flame of a lamp. She moved around in the attic, searching through trunks of the items that had come from her mother’s cottage in Ireland. It was difficult to see so many memories reminding her of her parents, but she also found it calmed her. She had avoided these things since they had been delivered years ago, but now her fears became secondary. She hoped something from her parents’ past might shed light on what was happening in the present. Alaina rummaged through a trunk of some of her mother’s clothes, pulling them out and smelling them, hoping for a faint whiff of the soft rose scent her mother used to wear. There was something lingering around the old clothes, and it took Alaina back to a time when she was a little girl. Nevertheless, the memory ended there. She paused for a moment, as if the scent reminded her of something else besides her mother. She subsequently released the memory when she saw the bottom of the trunk was not as deep as it should have been. She pulled out the remaining dress and ran her fingers along the bottom and edges. She next looked on the outside of the trunk. Nearly six inches of extra space remained near the bottom on the inside.
Alaina felt along the inside edges and became excited when she found a gap. Slowly reaching her fingers into the hole, she simultaneously pushed down on the other edge for leverage and surprised herself when the bottom tilted to reveal the extra space beneath. Removing the thin board, she set it aside and gasped when she turned back to the trunk.
“Oh, Mother. What did you do?”


The Author
MK McClintock is an over-worked entrepreneur, baker of decadent desserts and all things chocolate, photographer of beautiful places, and most importantly, a writer.

She dreams of a time when life was simpler, the land rougher, and the journey more rewarding. With her heart deeply rooted in the past and her mind always on adventure, McClintock calls Montana home.

Open only to those who can legally enter, receive and use an Amazon.com Gift Code. Winning Entry will be verified prior to prize being awarded. No purchase necessary. You must be 18 or older to enter or have your parent enter for you. The winner will be chosen by Rafflecopter and announced here, as well as emailed, and will have 48 hours to respond or a new winner will be chosen. This giveaway is in no way associated with Facebook, Twitter, Rafflecopter, or any other entity unless otherwise specified. The number of eligible entries received determines the odds of winning. VOID WHERE PROHIBITED BY LAW.

I love a good historical romance. This sounds great.