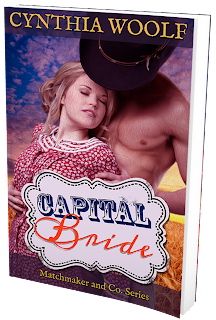 Unexpectedly homeless, un-wed mother Sarah Johnson has few options.  They could go live with her cousin William, but Sara believes there’s something untoward about his offer and it leaves her feeling uncomfortable.  She's qualified to be a governess, but no one will have her because she wasn't married when she had her precious MaryAnn.  Matchmaker & Co could be her salvation as mail-order-bride to Mr. John Atwood.

Single father, John Atwood, is raising his daughter the best he can in the wilds of the Colorado Territory but knows he needs help.  No woman he knows wants to take on the raising of his daughter who hasn't spoken since she saw her mother brutally murdered during a bank robbery.  Can Sarah, John and their two daughters overcome their pasts and find happiness together?

Excerpts from Capital Bride
Excerpt 1
New York City    April 10, 1867
On the other side of the door was her last resort.  Either this or prostitution and prostitution was not a choice.  She couldn’t raise MaryAnn in that environment, nor if truth be told, could she lower herself to live like that.  At least this way there would be some stability in her little girl’s life.
Sarah took a deep breath, turned the knob, and walked through the door to a better future for her daughter and, if she were lucky, for herself.
The office was small and precisely kept.  A single desk with a straight, high backed wooden chair, one in front and one behind, sat in the middle of the room.   She’d noticed the flowered curtains were open on the way in, curtains tied to the side.  The small area was flooded with dazzling afternoon light.  The walls were whitewashed and the desk well organized.  There were several tables with neat piles of files along one wall.  The other wall held several rows of pictures of women and men.  None smiling, as that was the way pictures were taken, but all appeared to be wedding pictures.  Below each picture was a small brass place with the names of the bride and groom and the date of the wedding.
A small, woman in her late thirties with fiery red hair, sat behind the desk.  When Sarah got closer she saw gorgeous dark blue eyes behind the wire rimmed glasses perched on the end of her nose.  Her eyes were so dark a blue they could almost be called violet.  They were striking and clear, honesty shone from them along with a “no nonsense” attitude.
“May I help you?” the woman asked.
“Um.  Yes.  My name is Sarah Johnson.  I saw your advertisement for mail order brides.”
The woman looked Sarah over, taking in her clothes, her hands clasped in front of her and ending at her face.
“First, let me introduce myself.  I’m Margaret Selby and I own Matchmaker & Company.  Please, sit down.  You’re older than the women we usually have.  You’re also better dressed and don’t appear to be hungry.  What would bring someone like you to my door?”
“I’ve been living with my great aunt.  She passed away suddenly two weeks ago and the lawyer says I need to find other lodgings.  My cousin, William, has inherited everything except a small stipend she left for me.  William is selling everything.  MaryAnn and I have nowhere else to go.”
“MaryAnn?”
“My daughter.”
“So, you are a widow?”
Now was not the time to be less than truthful, if she wanted this woman’s help.  “No.”
“I see.  How old are you, Miss Johnson?”
“I’m twenty-eight.”
“And your daughter?”
“MaryAnn is five.”
“Tell me, Miss Johnson, how did you come to find yourself with child at age twenty-two without being married?  Surely you knew how those things happened by that age.”


It was May, but the chill air gave Sarah shivers.  She pulled MaryAnn closer to keep her warm.  MaryAnn taking a chill was that last thing that Sarah needed.    The trunks blocked part of the wind that whistled by the open platform, but none of the cold.


In a short while, a large man pulled up driving a long wagon with side boards.  He had dark coffee brown hair that brushed the collar of his black wool coat and was graying at the temples.  With his vivid green eyes he was one of the handsomest men she’d encountered in some time.  Why would this man need a mail order bride?
Next to him was a little girl with hair as pale as MaryAnn’s was dark.  She had the same green eyes as her father.  The black coat she was growing out of revealed the hem to her light blue dress peeking out the bottom.  This had to be Mr. Atwood and Katy.
He jumped down and then held his arms up to the child.  The girl fell into them and wrapped her arms around his neck.  There she buried her face, clearly not wanting to meet her new stepmother and sister.
He carried her up the stairs of the platform stopping in front of Sarah.  Now that he was closer she saw that his green eyes were rimmed with dark lashes and stood in sharp contrast to his dark hair.  Sun, wind and laughter had left lines at his mouth and eyes, giving him character.  His face was very pleasing with a sexy shadow of stubble on his strong jaw.
“Mrs. Johnson?”  His smooth baritone washed over her leaving her with a little tingle of awareness.  One she hadn’t felt in years.  Not since before Lee died.
Sarah nodded.  “Yes.  Mr. Atwood?”
“Yes.  This is Katy,” he smiled down at the girl in his arms.
“Hello, Katy.  I’m Sarah and this is my daughter MaryAnn,” Sarah said.  She placed her arm around MaryAnn’s shoulders pulling her into her side.
“Hello,” said MaryAnn.
Katy turned and looked at MaryAnn, then buried her face in her father’s neck once again.


Cynthia is giving away  a $5 giftcard and an ebook of Capital Bride at each stop of the tour.
Comment for a chance to win!

Cynthia Woolf was born in Denver, Colorado and raised in the mountains west of Golden.  She spent her early years running wild around the mountain side with her friends. She worked her way through college and went to work full time straight after graduation and there was little time to write.  Then in 1990 she and two friends started a round robin writing a story about pirates.  She found that she missed the writing and kept on with other stories.  In 1992 she joined Colorado Romance Writers and Romance Writers of America.

In 2001, she saw an ad in the paper for a writers conference being put on by CRW and decided she'd attend.  One of her favorite authors, Catherine Coulter, was the keynote speaker.  Cynthia was lucky enough to have a seat at Ms. Coulter's table at the luncheon and after talking with her, decided she needed to get back to her writing.  She rejoined both CRW and RWA that day and hasn't looked back.

Learn more about the author at:  www.cynthiawoolf.com. 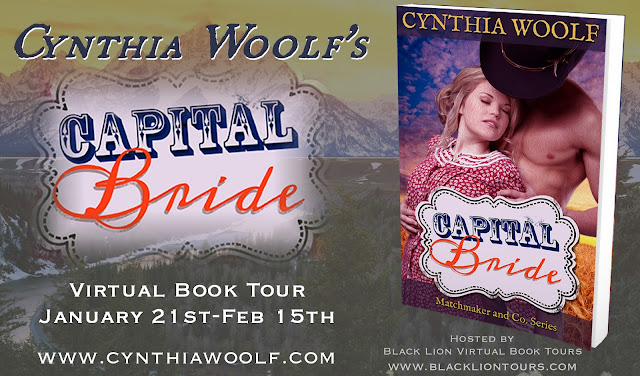 Thank you, Black Lion, for having me here today and getting me started right on my new tour for Capital Bride.

Your book sounds great! Will be adding to my TBR pile!

I love green eyes on heroes. :) Best luck with your tour.

I love the time period and the NYC location! This sounds like a fabulous story for me.
Thanks for sharing the excerpts and have a wonderful tour!

Great premise and excerpts. Best of luck with your tour!

I love everything about this book. And the ten reasons for reading the books. Right on. Good luck with your tour.

I agree with your top ten reasons for reading romance books - though I think I'd put a few of them in a different order. ;)

Best of luck with your newest release!

Best of luck with your tour. The book is a great read and the series sounds wonderful. Can't wait for more.