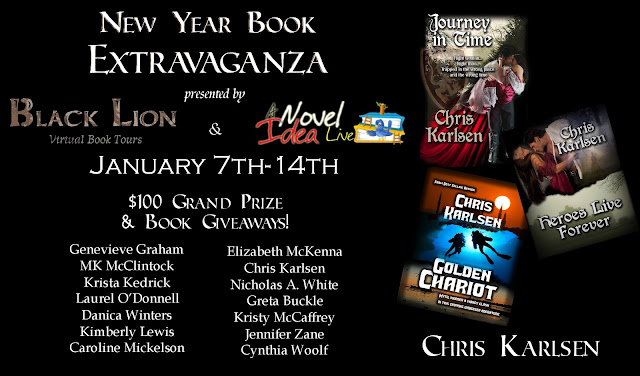 Journey in Time
by Chris Karlsen
TRAPPED IN TIME
London attorney, Shakira Constantine, finally agrees to spend the day with her handsome client, Alex Lancaster. While riding in the countryside, the couple finds themselves caught in a time warp and transported back to the 14th century, and an England preparing for war. Everyone believes Alex is the Baron Guy Guiscard...a baron who died in the upcoming battle.
​
If they can’t discover a way to return to the 21st century, Alex will have to sail with the army to certain death. Shakira will be left alone to survive in the alien and terrifying medieval world.

Basil is the man of her dreams, her knight in shining armor. She falls in love with him and he with her. Basil soon realizes she needs to live a normal life, a happy life with a mortal, not a ghost.

A lifetime later fate intervenes. Basil, still in love with Elinor, is told her spirit lives on in a young woman. He's given another chance at life to prove great love can transcend anything, even death and time.

The rare discovery of a ship sunk during the time of the Trojan War has been found off the coast of Turkey, near Troy. Charlotte Dashiell is an American nautical archaeologist and thrilled to be part of the recovery team. The wreck may contain proof of her highly controversial theory about the Trojan War.

Charlotte is present when the Turkish government agent assigned to guard the site is murdered. Her possible involvement and a questionable connection to a private collector of black market relics bring her under suspicion. Atakan Vadim is the Turkish agent sent to investigate her. Unknown to either of them, the smuggler behind the murder plans to steal a valuable artifact and frame Charlotte for the theft...after they murder her.
Now Available
Kindle

New Year Book Extravaganza!
Find details about the event and books at:
http://www.blackliontours.com/#!new-year-book-extravangaza/c13ra

Hi MK,
Thank you spotlighting my books. I look forward to the New Years party and chatting with all the party goers.
Have a great day,
Chris Karlsen