It's a Two-Day Book Blast for Gallagher's Pride, the first in the Montana Gallagher Series! 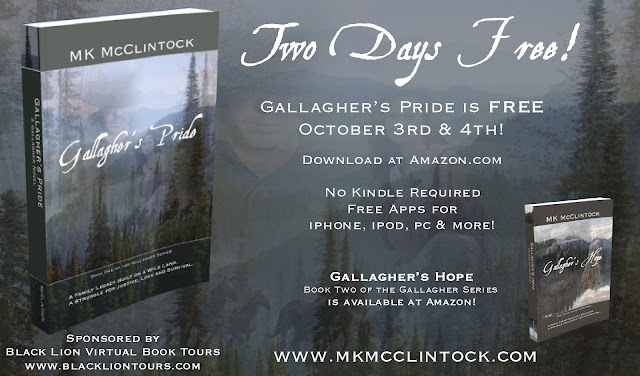 
She was on a quest of discovery.
He was on a quest for revenge.
Together they would discover a second chance.
​
​Brenna Cameron travels from Scotland after losing someone she loves in search of family she didn't know existed. Alone now in the world, Brenna makes an arduous journey, following the trail of discovery to Briarwood, Montana. Here she meets Ethan Gallagher, and the rest of the Gallagher clan. Only with their help is she able to discover lost family, heal old wounds, and embark on a treacherous confrontation with a man who destroyed her family.
​
As head of the Gallagher clan, Ethan has more than enough to occupy his thoughts and time—he didn't need the complication of Brenna Cameron and he certainly didn't need the trouble that came with her. Ethan takes on the unwanted duty of self-appointed protector to the headstrong Scot, only to discover there is such a thing as second chances and more to life than revenge. 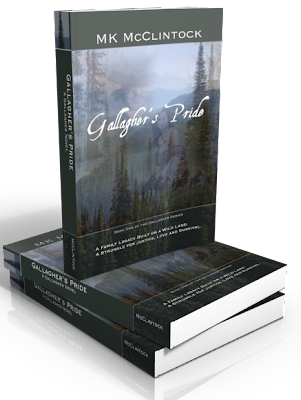 Excerpt One
It seemed almost impossible that Brenna was standing in the middle of a dusty street on a brisk autumn morning thousands of miles from everything she had ever known and treasured. Almost impossible, but not quite for there she was in the town of Briarwood in Montana Territory. It had been an arduous journey at best. The seemingly never ending crossing of the Atlantic, the miles of train tracks, the stink of unwashed people the farther from civilization she got, and the rattling stage ride. But this is where her grandfather lived. Or so the telegrams she received months past had indicated. It had not taken long to discover the whereabouts of Nathan Hunter. Once Brenna had arrived on Boston’s soil, a place so foreign to the country existence she loved, she had sent telegrams to the postmarked address in Texas from where Nathan Hunter’s last letter was sent. A reply arrived less than two days later informing her that Nathan Hunter had left Texas. He had moved to the Montana Territory some years back. A dozen more telegrams and the services of a costly private detective later, and she had found him. If Brenna’s mind had not been filled with questions and worries, perhaps she would have better appreciated the grandeur of the place she now stood. Mountains the likes of which she had never seen jutted upward from the earth. So different from home, for those in Scotland were mere hills compared to the towering peaks surrounding the valley, which seemed to stretch farther than she could see. The fresh pine scented air reminded her of the long walks she used to take with her father back home, when she would pick bundles of heather for her mother. Blue skies so vast there was no end to the journey an eagle could take. Wildness and beauty unlike anything she’d ever imagined surrounded her.

Excerpt Two
Are you out of your mind?” The words tumbled from her mouth before she could stop them, but he had gone and truly shocked her.
“No actually I’m not. It’s your safety I’m thinking of,” replied Ethan, more to himself than her. He loosened the hold on her arm.
Brenna let out an exasperated sigh, something her mother had always tried to discourage, and said, “I do appreciate your kindness, Mr. Gallagher...” “Ethan.”
“…Ethan, but I’m certainly not the type of woman to just go home with two men whether I know them or not. It would be highly inappropriate, not to mention stupid.”
“And you’re not stupid.”
“Not as far as I can tell,"...

Excerpt Three
He was tired of waiting. Six days now he’d been camped out here and had nearly been caught by one of the Hawk’s Peak hands. He would’ve given up and ridden back to the ranch if he didn’t think his boss would take a whip to him. Why he was elected as watch when his boss found out the pair left the ranch was beyond him. He waited and waited until finally he saw two riders coming through the trees west of his hiding spot. He mounted his horse and rode just a little closer. The rider waited until he was sure it was the Scot who rode in with Gallagher. Once satisfied, he raced his mount up and over the crest and rode hard back to the ranch. His boss was waiting for him on his front porch smoking a clean cheroot.
“Did you see them?”
“Oh yes, they just rode in, both of them.”
“From which direction?”
“North.”
“The only place north of here is Bright River.”
“Yes sir, unless you go way north and that would’ve taken them a whole lot longer.”
“Well done Bradford,” the older man said tossing the man a small pouch. The gold jingled bringing a smile to the rider’s lips. Those cold nights hadn’t been a waste after all. “Why don’t you go and find one of the girls. Have a good night, you’ve earned it.”
“Thank you sir.”
“Oh Bradford, just be ready to ride out again.”
The rider nodded and headed to the bunk house. His thoughts turned to the pretty Scot staying over at the Gallagher’s spread. He licked his lips thinking how much fun she was going to be. He pulled the skinny pale girl with the red stringy hair out of her bunk and dragged her to his own. She was a poor substitute, but she’d have to do until he could get on top of Gallagher’s whore.

Excerpt Four
“Where did you sleep last night?”
“On my bedroll.”
Oh God, why was she not surprised he had said that.
“But there are only two and I had them both when I woke up.”
He looked at her and nodded, “True.”
She really wanted to throw that pot of coffee at him.
Online website templates