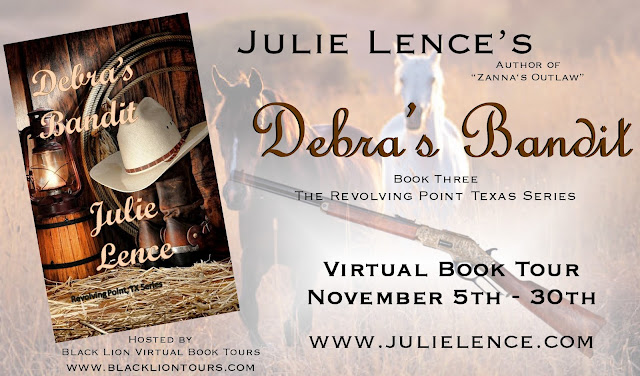 Forced to flee his home in Chicago, Gage Cantrell shed his greenhorn ways and joined an outlaw band. He’s spent the last six years dodging bullets and a Pinkerton determined to bring him to justice. Now that Gage has settled for a spell in Revolving Point, Texas, hoping to win the heart of the woman he loves, his past is about to catch up to him. Trouble is, Debra doesn’t know about Chicago. If she’ll forgive his cowardice on that fateful night, he’ll finally know peace. That is if he can thwart the Pinkerton and send him packing—for good.
​
Raised in the St. Louis orphanage, Debra Moore has known more hard times than good. Riding with her brother and Gage as they raided the west brought about a longing for a real home, and for Gage to return her love. She’s found a comfortable haven in Revolving Point and wants Gage to cease to his bandit ways and put down roots with her. But Gage has never been the settling type, and lately he’s been more secretive than usual. Something’s bothering him. She’s going to find out what that something is and convince him there’s more to life than the tomfoolery of outrunning a posse.